How would you do it?

I already found this function for an impulse (helped by math.SE). It works for single shots, but not for automatic weapons.

Just combine the individual shots' impulses? Something like this: 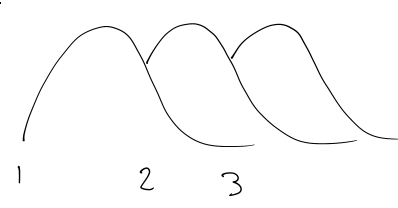 You could of course add realism:

Particularly when firing on automatic, humans have a tendency to get used to the recoil. Basically, there is some factor that decreases the recoil impulse down to some point. The first shot recoils hard and the following shots add to the kick, but each with decreasing force, until some saturation in the soldier's capability for holding the gun steady is reached. This could be done with a function that modulates that impulse function based on the time since the last shot and the number of shots taken in the same chain of automatic fire.

A slight random factor is also always present in reality.

well basically, just have some kind of (semi-randomized) rotation that will cause the gun to jerk in an upward direction, and just apply it for every shot

Not the answer you're looking for? Browse other questions tagged mathematics physics first-person-shooter or ask your own question.

4
Factors to consider when building an algorithm for gun recoil
1
How do I implement realistic recovery from weapon recoil?

5
Farseer - Apply Impulse
9
How to resolve penetration of two colliding bodies
6
2D car physics and high speed turning
1
How do I make a character “jump” when leaving an up slope?
5
Why do most FPS games have a machine gun, shotgun, and sniper rifle?
4
How is shot synchronization implemented in multiplayer FPS?
1
How would joints work in an impulse-based physics engine?
0
Move with velocity based on rotation