I've got a an OpenGL scene rendered with a bunch of sprites, and I'd like to automagically add drop shadows to all of them. Here's a picture showing what I mean: 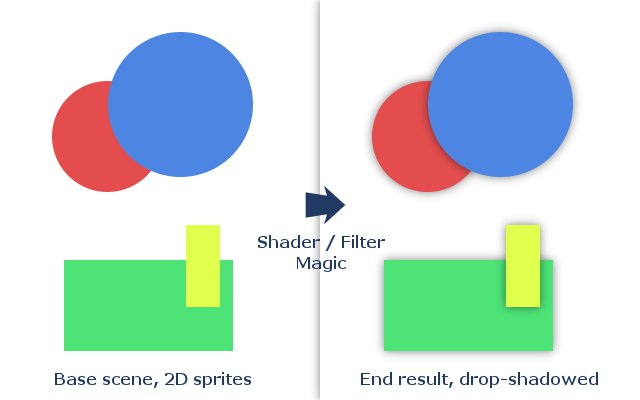 The scene uses orthographic projection, the sprites are textured quads, and I'm using the depth buffer to draw them front to back. I'm working with OpenGL ES 2.0, but thoughts from the iOS or non-ES worlds would be appreciated as well. I've tossed a few ideas around in my head of how I can go about this, and I'd like to find out which has the most promise.

I don't want to do any shadow work with external textures, since I use the same sprite textures at varying scales, and pre-baked shadows would scale unnaturally.

So are any of these better than the others? Are there other options I'm not thinking of? Thanks!

Your option #5 — generating shadow textures — has a low per-frame cost compared to performing blurs, is readily customizable, does not introduce a lot of complexity in other areas of the rendering process. I recommend trying it out and seeing whether the memory/startup cost is too much before investigating the other options.

Since you are using the depth buffer, you will need to draw the shadows after the opaque sprites and use a subtractive blend function, to avoid drawing-order dependencies.

Not the answer you're looking for? Browse other questions tagged opengl android graphics opengl-es .

3
Why does OpenGL seem to ignore my glBindTexture call?
3
What is causing these visual artifacts on my OpenGL sprites?
5
Z Order in 2D with orthographic projection and texture atlas
6
Batching dynamic sprites in OpenGL
0
"Quad" background showing on OpenGl ES 1.0/1.1 Sprites
0
How do I follow this glsl1.2 + lights + shadows tutorial?
1
Android OpenGL Sprite Component Pattern
0
Simulating sprite shadows for a 2D top-down game