How to wire finite state machine into component-based architecture? [closed]

State machines seem to cause harmful dependencies in component-based architectures.

How, specifically, is communication handled between a state machine and the components that carry out state-related behavior?

The overview is fairly light, but check out these slides from a presentation I did for New Game Conf last year:

The gist of the technique is to combine the action list pattern (explained -- somewhat poorly -- in the slides) with behavioral state machines that act upon a component-based game entity.

It is in essence the same as creating a special composition system just for AI behavior, geared towards the kinds of inter-behavioral integration you need for simpler AI systems.

My favorite part of that particular game was how we could create entirely new types of enemies by simply selecting from a list of pre-written behaviors, put them into the action list for the game object (residing in a BrainComponent) in the order of desired priority, and everything just worked. With an action list that allows for Blocking/NonBlocking actions, this can do some really cool things despite how simple it all is to implement.

Even behaviors like "stun" where really just a StunBehaviorAction pushed onto the top of action list stack; if the stun behavior become activated (after observing that the game object's EarsComponent heard a stunning shockwave attack) then it set its internal state to Stunned, told the AnimationComponent to play the stun animation, and set its action state to Blocking, and its timer to a stun timeout pulled from the game object's EnemyParametersComponent. Since it was Blocking and at the top of the action list, none of the other BehaviorAction's in the action list would get their update method called, so they would essentially be switched off. When the timeout expired, the StunBehaviorAction set its state back to Idle and its action state to NonBlocking.

The other behaviors we implemented were almost all implemented with a single internal state machine. The only two that didn't have state machines, in fact, were the PatrolPathBehaviorAction (it would push a series of PathAction's onto the action list if it was idle, which in turn pushed MoveAction's) and the GuardHomeBehaviorAction (always at the bottom of the action list, and would always just push a PathAction back to the enemy's home location). Every other behavior was a state machine. 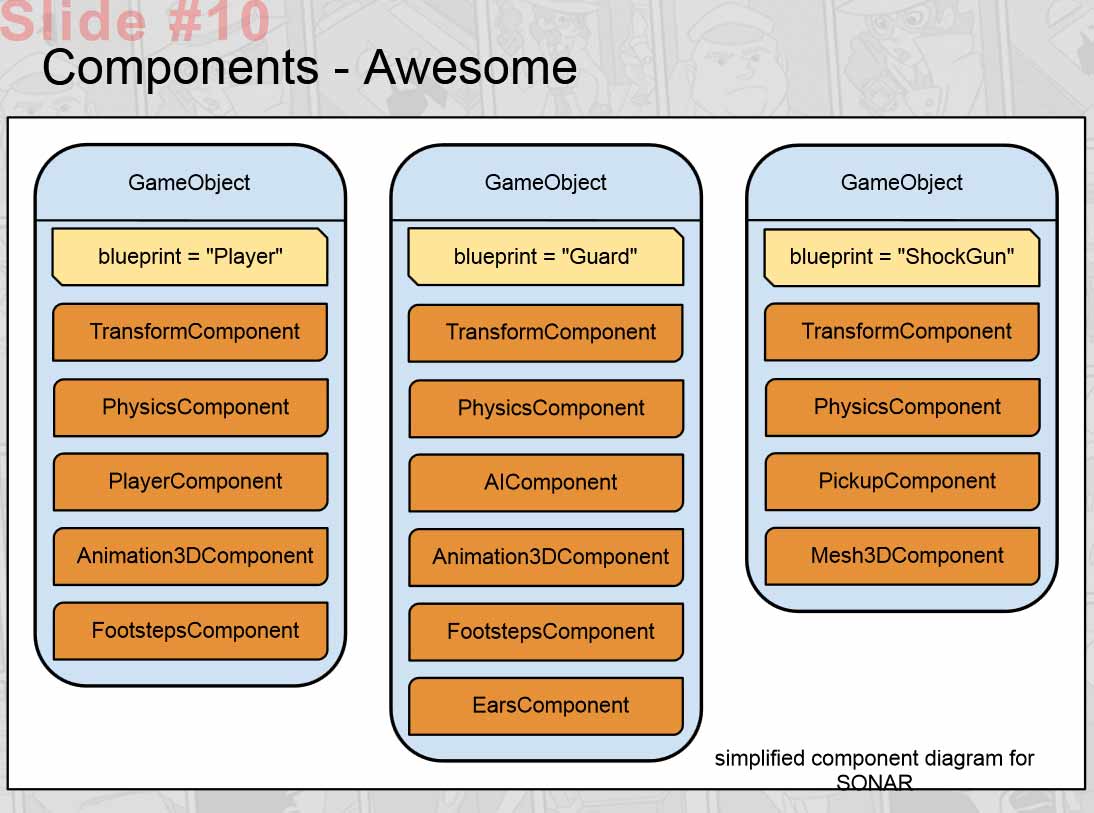 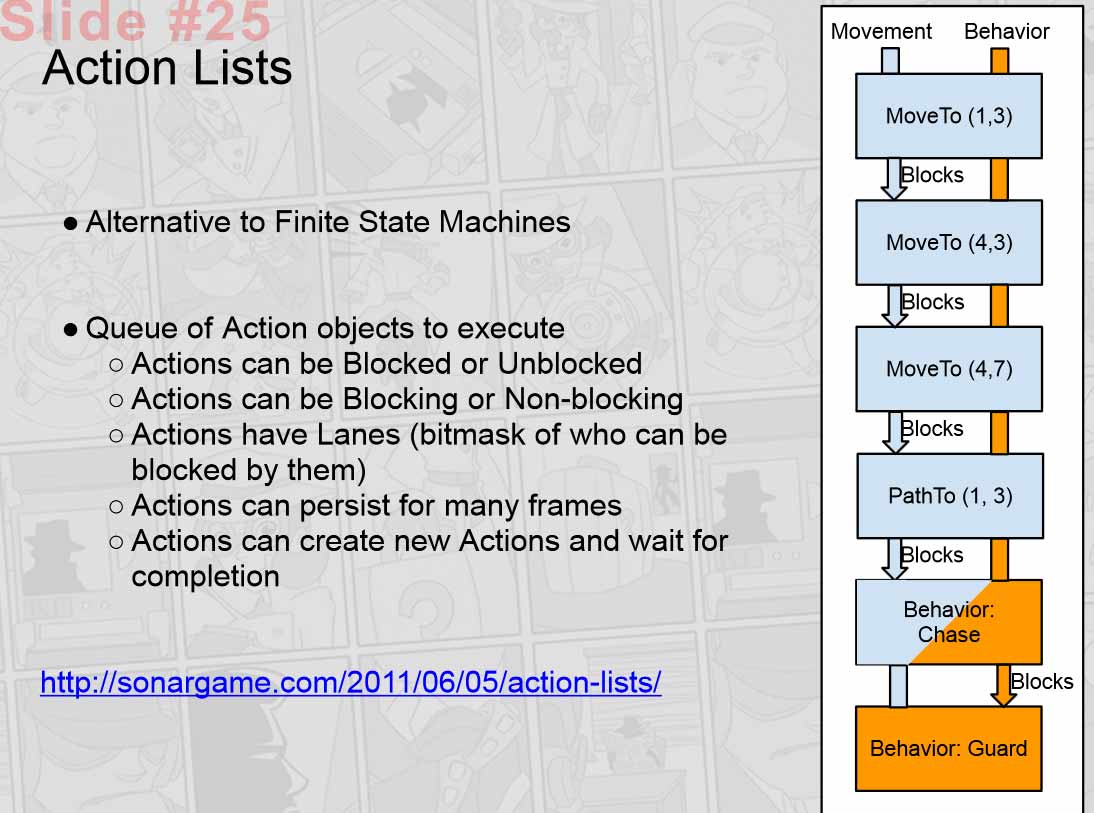 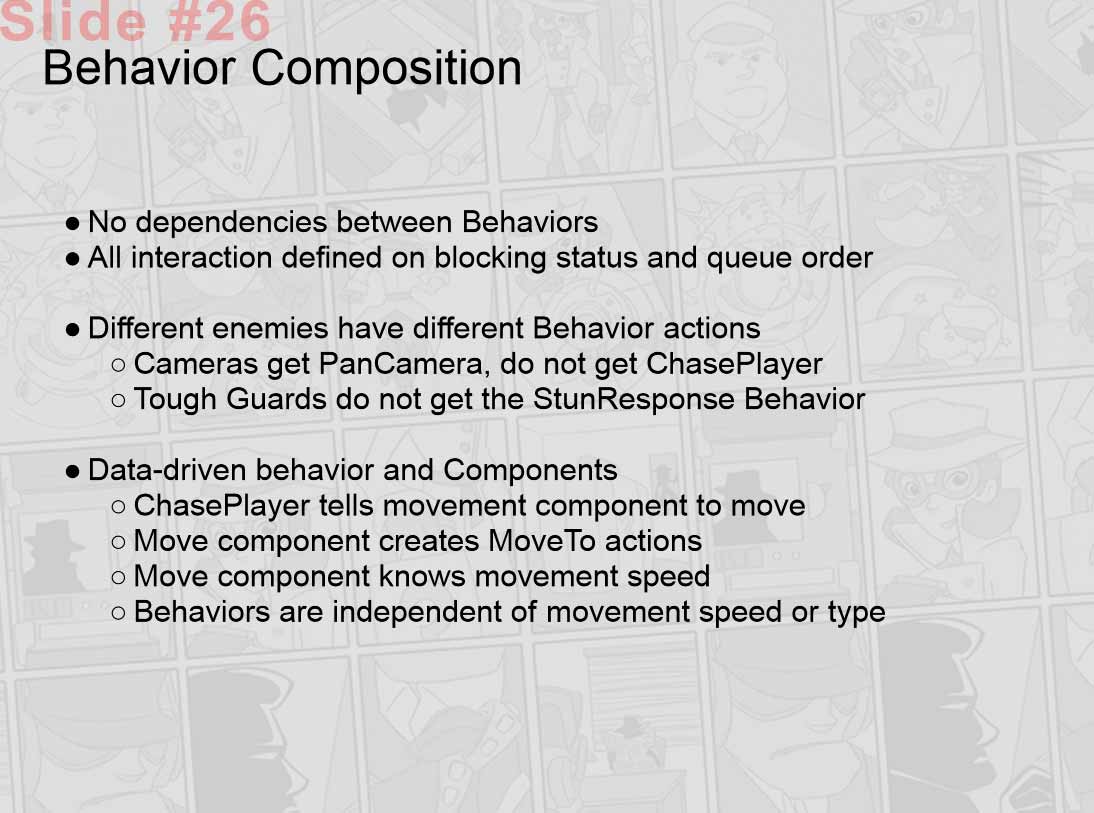 At a previous company I worked for we had a component-based system with state-based AI. We had an AI component that controlled all behavior for that object/unit. When the AI was active, like wandering, attacking, etc, it would receive an update each frame to do any logic that was needed. When the AI was idling or not moving the component was deactivated and not updated each frame. The component, while deactivated, could still receive event-based messages, so it would receive a message for something like a player entering its aggro radius, and could respond to that by reactivating the AI component so that it could do frame-based updates.

It's a little unclear what you mean by components as your terms are very vague with no concrete examples. Often game entities are built using composition rather than inheritence. Thus you could make them into something that can take damage by adding a health component to the entity or you could make them animate by adding an animate component. One could also put the AI in such a component. There will be decision making logic in your AI component and if you're concerned about coupling that to much of the other code in the system you could collect the information into a blackboard which the AI logic is only allowed access to. There is also the issue of dependencies on the output of AI system. Basically your AI is controlling an entity and that control needs an interface. One useful concept is that of a controller or gamepad. Your AI can fill out a similar structure that a player gamepad would fill out (though it might have some extra "buttons" for specific abilities). Now this structure could then be passed to your animate component which would interpret it and select the appropriate animations to play. Different AI sub-components could even be writing to different fields of the structure or to the same fields with different priorities. Aiming and walking for example.

21
How to implement behavior in a component-based game architecture?
7
How to transition between states and mix states in a finite state machine?
3
Handling data logic on libgdx ai state machine or in ashley system?