I am having what is probably a newbie problem with Unity, but for the life of me, I can't find a decent solution to it. In short: my rigid bodies collide, but sometimes, they interpenetrate and stay stuck.

I am looking for a solution that would either 1- stop the interpenetration from even happening 2- or at least eject the bodies to 'unstuck' the collision.

By making the physics fixed step 0.01 instead of the default 0.02, I can avoid some of the interpenetration. However, that hardly sound like the proper way to fix this problem.

Here is a screen shot of the bodies colliding. The car on the right is shown completely and you can notice that the ones behind have penetrated the others to some extent.

To give more information that could be relevant:

Thanks to everyone who helped me with the issue.

There were a few factors in play. First, there was the scale. What I did to figure this one is create an empty scene and put 2 cubes in there. I varied the size and position of the cubes (from 68x35 to 0.65x0.35 for size and the position by factors or 10 as well) and attached a script to move them, with variation in speed by factors or 10 as well. So all else being equal (same size on the screen and time to cross it), the size of the objects elected a different response to collision: big object got interpenetration, small ones none. I am not familiar enough with Unity to explain the cause of that, but it is reproductible.

A possible second factor was the shape of my colliders and how it may be possible that they screwed up the ejecting part. The colliders I had were not overlapping, so I simplified them to 2 boxes in the shape of a cross.

Finally I was setting the position of the objects manually in FixedUpdate and that caused some problems with interpenetration at lower scale (at higher scale, it didn't appear to matter). I changed that to work with the body velocity and it helped.

Any general rigid-body physics engine should be able to eject interpenetrating bodies given good collision data. Try changing the collision shape of your cars; it sounds like they might be getting stuck due to inward-facing collision points. For example, if your 3 boxes are arranged as front-middle-back then you could have a problem like this: 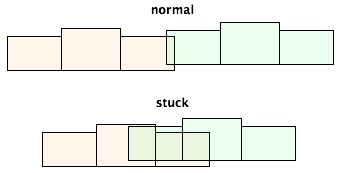 Note that the rear box of the front car (whichever one that is) is behind the front box of the rear car, so the contact points generated will be facing the wrong way. On the other hand, if you make them out of two intersecting boxes, then there are no such inward faces:

(Similar problems can happen when trying to collide against meshes, since meshes specify surface rather than volume.)

You should also consider whether you really need more than one box to get the gameplay effects you're looking for.

This is all largely speculation since you haven't specified what your collision shape is in detail.

Not the answer you're looking for? Browse other questions tagged collision-detection unity or ask your own question.

0
How to handle zooming? (Collision detection and speed are off)
1
Unity Problem with colliding instances of same object
2
Getting child collider when collision occurs in compound object in unity3d?
2
Rigidbody physics concept: Why translate collision shape on-the-fly instead of mutating it?
8
Why do Physics Engines use collision margins?
1
Basic billiards game: Can't detect collision between cuestick and cueball
0
How do I perform collision resolution for rigid bodies of varying volume?
0
Car driving through walls with transform.Translate()