This is just a theoretical question. I was thinking of using GLEED2D to map a top-down game (I haven't decided on what type, but that shouldn't matter for this question.). I chose GLEED2D because I was getting tired of tile-based maps, and wanted to try something new.

However, two questions come to mind: How would you implement collision, and how would you display faux 3d? (I can't come up with a better name. It's where in RPGs and other topdown games you can have a bottom wall that obscures your character if you walk up to it. Say there's a pillar on the map. On a tiled map, it takes up one tile of space that you can't move on to, but the sprite itself is taller than one tile, so it covers character when you are behind it.)

An idea I had was to use the primitive shapes such as the Path to define areas where the character should collide. But then there's the faux 3d issue, which I can't figure out. Maybe GLEED2D isn't meant for it?

Under the assumption that you will use Gleed2D mostly for sprite based level editing, i.e. by placing, rotating and scaling a set of rectangular sprites in the world, I would suggest one of the following approaches to collision detection depending on your needs (read to the end even if the first suggestions don't apply to your case):

I'm not sure I really understood your problem, but from my interpretation, I think it's just a matter of choosing the correct drawing order for your sprites. The approach I would take would be:

Note: I marked the origins on the sprites using a blue dot, and drew them top to bottom. I assume this is the effect you were talking about. 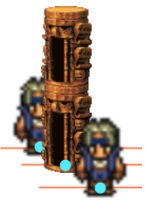 Not the answer you're looking for? Browse other questions tagged sprites gleed2d or ask your own question.