A* : Partial recalculation when one node *changes*

I have implemented an A* library. Its most interesting feature is that it is "interruptible"; for example, you can stop the calculation loop on a game frame, and resume it later on the following frame.

The library works by creating "Nodes". Each node holds information about a cell in a grid: what is the cost to get there, what is the cell's "parent" (from which it is cheaper to get to the cell) etc. This information is stored until manually released; it is available for other uses if needed.

The "bestNode" is a pointer to one of such nodes. When the search starts, it is the "origin", and it gradually changes until the destination is reached.

Now I'd like to use that information to "partially recalculate" the node information when a node changes; the typical example is a door which opens/closes, allowing new paths/cancelling existing paths. Since I have already calculated the path from the origin to the "changed" node, I'd like to conserve that info, instead of re-calculating everything.

So far my thinking is:

So I have two problems:

Are there any other "partially-re-calculable" A* algorithms out there? I could not find anything on the subject.

You'll probably get farther with Google with a bit of terminology: the usual jargon for a recalculation of an A* path is a "replan". In more specific direction, the situation you raise is the primary stated motivation of HPA*; it's a fairly well proven-out algorithm at this point and is likely to provide solid guidance.

@RichardMarskell-Drackir in the comments has it right imo. Richard is trying to describe a scenario where more than just the subsequent A* calculations are invalid and you will will either have to completely recalculate the entire path from where you are now, or at a minimum find a way to roll-back the A* calculation even further than the changing tile. Here's the example Richard was explaining: 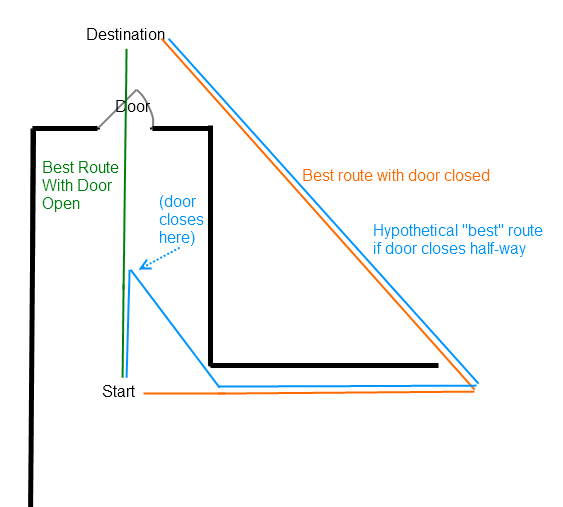 You don't want the pathfinding algorithm to walk you right up to the closed door then turn around, you want to turn around right away. There may be shortcuts for certain specific scenarios, but in the general case, you'll want to recalc, or store the entire A* tree and be able to roll-back all invalid calculations.

I have found Lifelong Planning, which seems to do pretty much what I wanted - it "reuses" the previous calculations to compute "a difference".

There is a demo applet (java), too. Draw some walls, calculate the paths, then draw some more and calculate them again.

Not the answer you're looking for? Browse other questions tagged algorithm path-finding lua or ask your own question.