So I have an object moving in a direction towards a fixed horizontal or vertical wall. How do I compute the angle that the object should bounce off at? The object can approach the wall at an arbitrary angle.

If you know the wall's normal vector and have an incoming direction for the object, then what you want is the reflection of a vector across a plane.

If n is a normalized vector, and v is the incoming direction, then what you want is −(2(n · v) n − v). The minus sign accounts for the fact that the reflection formula doesn't actually reverse the direction, as an object's velocity would reverse.

You didn't specify if it was a 2D or 3D game. But if it's a 2D game and your walls are guaranteed to be horizontal or vertical and you just want to bounce the object off them, there's a much easier way than having to deal with reflections.

But if you really care about knowing the angle, then in general terms, the angle of reflection is the same as the angle of incidence. This angle is measured in relation to the wall's normal. Here's a picture that should make it clear: 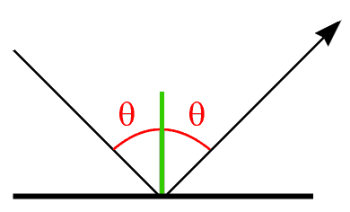 In case you ever need to handle this for arbitrary walls, you'll need to look into how to reflect a vector. It's really just a small formula that takes the wall's normal and the incidence vector, and returns the reflected vector for you. Here's the formula XNA uses:

And for 2D you could just do:

This is just about reflecting a vector along the walls normal vector.

Not the answer you're looking for? Browse other questions tagged mathematics physics or ask your own question.

6
How to bounce a 2d point particle off of a circular edge
1
What is the MTV (Minimum Translation Vector) in SAT (Seperation of axis)?
1
Calculate path of laser beam?
0
Moving point (as line)-Polygon collision detection

22
How to deal with corner collisions in 2D?
1
ricocheting off a wall
0
3D collision physics. Response when hitting wall, floor or roof
2
Using Farseer Physics, how can I get objects to bounce at the correct angle
1
Unity ball not bouncing off wall correctly
2
Unity Physics Not Getting Bounce Angle
0
How to find the resulting angle of a ball hitting a wall in 2D