I have a sprite which has Velocity and Position, either stored as Vector2. At each Update cycle, velocity is added to the position.

I would like to give the sprite a third vector, Target. New targets may be given at any iteration. I would like the sprite to essentially move in a random walk pattern, however two parameters must be exposed:

What is a good, simple way to do this? If possible, give the answer as a Vector2 RandomWalk(Vector2 target) method.

I already have a NextGaussian(mean, stdev) method available, if that is helpful.

I would take the "wander" steering-behavior (source code can be found here) and tweak it in a way so that the random numbers are biased towards your target.

To get a smooth random walk, you could use Catmull-Rom splines. This kind of spline takes a sequence of points and generates smooth curves that pass through each point. So, you could generate random waypoints for the sprite to move through and animate it along a Catmull-Rom spline through the waypoints. For the spline to work you'll need a total of four waypoints: the previous two and the next two. When the sprite reaches a waypoint, throw away the oldest one of your set of four and generate a new one, then continue animating along the spline.

Here's something I whipped up in about 20 minutes. We take the direction from the walker to the target, pick a direction within a certain amount of degrees of that direction (an amount that decreases as the walker gets closer to their target). This algorithm also accounts for distance to target so that it will not walk past the target. Long story short, it basically wobbles left and right a small random amount and homes in on the target as it gets closer.

Graphed out from a bird's eye view the path would look like the points in the image below, starting at 'W' (walker) and ending at 'T' (target). If you want a more natural movement you would precalcuate a few points ahead of time, and create a spline, giving you many more points you can have the walker follow. I've estimated what this path would look like after being made into a spline, and that is represented by the line in the image. 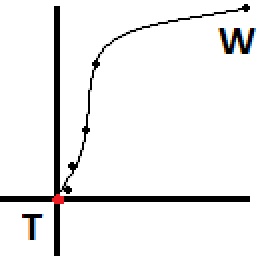 And here's the example code:

Based on your specific game you can tweak distances, FOV, randomness, and frequency that this is run, until it suits your needs. I'm sure the algorithm could be cleaned up a bit and optimized, I didn't spend much time on that, I just wanted it to be easy to read.

Not the answer you're looking for? Browse other questions tagged xna c# random linear-algebra or ask your own question.

3
C# Pathing algorithm for moving a object from point(X, Y) to point(X, Y)
29
Continuous weighted random distribution, biased toward one end
0
Performance of XNA 4,0 static vertex buffer / VertexPositionNormalTexture in F#
9
Slerping rotation mirrors
37
How can I make a “random” generator that is biased by prior events?
3
Random numbers with a left or right biased skew
3
How can I make players move diagonally at equal speeds?
0
How to create a projectile path in unity using physics