How do I simulate the Doppler effect in a game?

I am trying to simulate the Doppler effect in a game (a car racing game). I am not using a specific sound library that simulates the effect; I only have a callback function where I mix the data.

I already figured out how to change frequency of a sample in the mixer function.

What I don't know is how much the frequency should change, depending on player and emitter position and velocity.

Here is what I have in the game:

where c is a constant, the velocity of waves in the medium (typically a big number), and vs and vr are source and receiver velocities relative to medium.

However, I think this is wrong. It won't produce any change in frequency (for example) if vr = 0 (player doesn't move) and the emitter has constant speed, then vr and vs won't change (while they should).

Then how should vr and vs be found?

However, this formula supposes that the receiver doesn't move, which is not the case here. If the player and the emitter move at same speed (or with a small difference), there should be no Doppler effect. This function is also specific to one case, I suppose the final formula should be the same no mater the situation.

Then vr,s and vs,r should be injected into the first Wikipedia formula:

I tested it and it works successfully, providing great results.

1) Assumes that both objects are moving on the same line - (this is explained in the wikipedia page you linked) your conclusion is correct, in this situation, with constant velocities, the frequency shift is constant. For the frequency shift to change, the relative velocities need to change, hence formula 2), for the situation where Vs is constant but not colinear with the S-R axis.

Formula 2) is misleading however: Vr should be read as Vs,r, that is, the radial/relative component of the source velocity.

Please note that the Doppler effect depends only on velocities, you only need the positions to find the S-R axis.

Edit: this should help you figure out the velocities, you need to use the Vs,r and Vr,r quantities with formula 1: 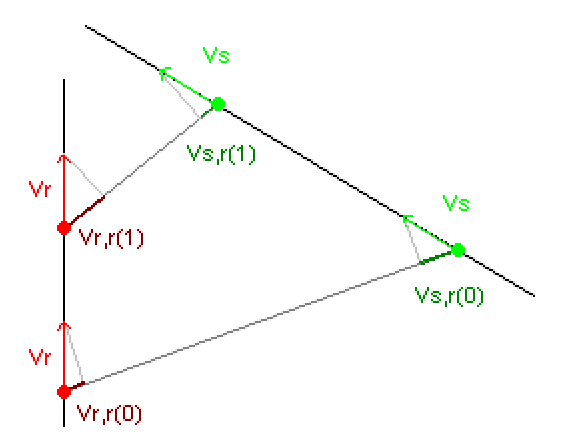 For XACT, there is the doppler pitch scalar variable should be specified, ie relative speed, where 1.0 is the same speed, but < 1.0 is slower and > 1.0 is faster

Thank you guys for the code, which I've transferred to this piece of C#, where a sound is calculated between screen position and a cue. Works precisely

Not the answer you're looking for? Browse other questions tagged c++ physics sound racing sound-effects .

16
Recreating retro/NES style physics with intentional imprecision
8
Differential programming for a vehicle
2
Physics Simulation - Pushing an object with user control
2
Using forces to reach a specific velocity
3
How can I apply an effect to a sound to simulate hearing it underwater?
1
How to convert strict limit in position into gradual slow down?
0
Should device tilt give my object a starting speed or acceleration?
2
What is wrong with my 2D orbit calculation?
0
Formula Racing Physics in curves (under-steer, over-steer)