How to move a 3d object in 3d coordinate space

How can I move a 3d object in a 3d coordinate space? I have a coordinate output from a text file like this: 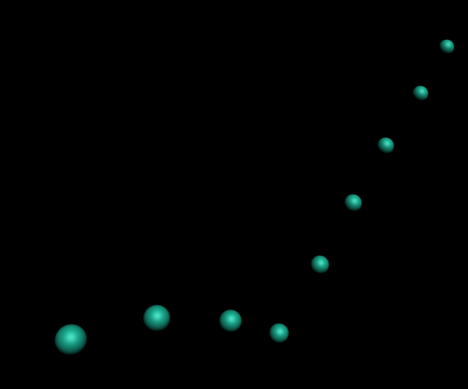 Set the world matrix to Matrix.CreateTranslation(x,y,z) multiplied by the local transformations of your model. Note I haven't done 3D since 3.1 but I don't believe this bit of the framework has changed.

Suppose (a basic example) you are drawing the object model like so: DrawModel(model, world, view, projection);. Here, view and projection are naturally the view and projection matrices related to the camera, and are not relevant for us. world is the matrix used for locating the object in the game world. It can be obtained with Matrix.CreateWorld(position, forward, up); where the parameters are fairly obvious and well-documented. If you already have a world matrix for this object, you can change its position with world * Matrix.CreateMatrix(newPosition). This is for telling an object to "instantly teleport" to a new location.

Your image implies that you are interested in creating an animation, where an object appears to the user to move on the screen, in the 3D space of the game world. AFAIK, the way to do this is to "teleport" it to a slightly different position at regular time intervals.

This should create a ball thrown upwards (in the +z direction), which gradually slows down and starts falling again. Note that the above code won't compile as is:

Also, keep in mind that:

However, if you just create a new XNA project in Visual Studio 2010, it should be obvious to you what code line to add where. There may be some SpriteBatch lines under Draw by default, I think you can safely remove them because they are for drawing 2D (which you aren't doing) but if you leave them, they will just make your models be drawn slightly weird, so don't worry too much about it.

Also, I have shown a very basic method here. With your list of coordinates, there are two things that can be done:

Not the answer you're looking for? Browse other questions tagged xna 3d xna-4.0 .

2
Why isn't my world coordinate mapping back to the proper local coordinate?
3
Representing 3D World Space with 2D Tiles
2
Translating an object along its heading
4
How to convert screen space into 3D world space?
2
Converting world space coordinate to screen space coordinate and getting incorrect range of values
0
Can't show an object in a tapped coordinate
0
How can I properly rotate a 2D vector in the "flipped" XNA client space?
2
How can I move a 3d object to a known Cartesian point on the surface of a sphere?