How can I change the path a sprite is following in real time?

Is there a common way to implement a character following path that is issued and replaced in real time?

For example: the character follows a path issued, and while it's on that path, if a new path is issued, the character abandons the existing one and follows the new path from where it is currently located.

I am trying to make a real-time action game, like Diablo, but in 2D and tile-based. The player can issue new destinations on the map and the in-game character should walk towards that destination in real time.

I got the path finding part all worked out, but I am having issues with getting the character to smoothly abandon an existing path, and follow a new path (when a new destination is issued).

The character sometimes flickers when a new path is issued while it's following an existing path. If the character sprite is not at the centre of a tile, it will "teleport" to the centre of the tile it's on and follow the path from there on smoothly.

I tried to get around this problem by first checking if the player is on at the centre of a tile, and if not, I amend a node in the front of the new path to get the player to move to that tile. But this still doesn't get me the desired effect, because if the same destination is issued over and over, the character will just keep walking to the same tile instead of walking towards that destination.

Your problem seems to be that you're teleporting your character to the center point of the first tile in the path (i.e. the tile your character is already in), but there's no need to do so.

Although this problem depends mostly on how you're processing the movement and how you're representing the path (either as world coordinates or as tiles), I think you can probably solve it simply by dropping the first node of the path and start moving directly towards the second node instead. See the picture below for clarification: 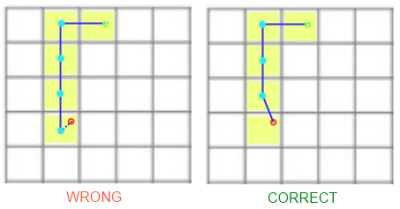 This basically means, make your current position replace the first node in the path, instead of appending it like you were doing. Example:

Not the answer you're looking for? Browse other questions tagged 2d animation tiles path-finding .

12
How do you do AI path following within a 2d physics engine like farseer/box2d?
9
How do you deal with transitions in animating walking?
1
How to get characters to be aware that their path is obstructed?
8
Implementing David Silver's Cooperative Pathfinding in Real-Time
0
Game mechanic player following path looks very roughly
1
Pathfinding to Get In Attack Range with "Transparent" Tiles
0
Help with NPC following the player in a sidescroller