Is there a simple way to group two or more sprites, so all of them will be dependent on each other?

I think that this question is very similar to this one, but I'm not sure if the answers are universal.

Currently in this example it's pretty okay but in case that I'd need to move my gun on axis y (only), I'm lost

I would solve this problem with a sprite hierarchy using a varitation of the composite design pattern. This means having each sprite store a list of the children sprites that are attached to it so that any modifications to the parent are automatically reflected in them (including translation, rotation and scaling).

In my engine I have implemented it like this:

With this you'll be able to do what you asked for without any other modifications to your code. Here's an example:

For starters I'll just drop in a sample project with this technique implemented, in case you prefer to just look at the code and figure it out: 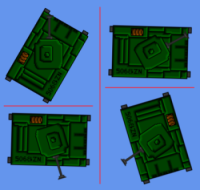 Note: I've opted for clarity instead of performance here. In a serious implementation, there are a lot of optimizations that could be done, most of which involve caching transforms and only recalculating them as needed (for instance, cache both local and global transforms at each sprite, and recalculate them only when the sprite or one of its ancestors changes). Also, the versions of XNA's matrix and vector operations that take values by reference are a bit faster than the ones I used here.

But I'll describe the process in more detail below, so read on for more information.

Step 1 - Make a few adjustments to the Sprite class

Assuming you already have a Sprite class in place (and you should) then you'll need to make a few modifications to it. In particular you'll need to add the list of children sprites, the local transform matrix, and a way to propagate transforms down the sprite hierarchy. I found it easiest way to do that just to pass them as a parameter when drawing. Example:

The LocalTransform matrix is just a regular world matrix built from the sprite's position, rotation and scale values. For the origin I assumed the center of the sprite:

Step 3 - Knowing how to pass a Matrix to SpriteBatch

One problem with the SpriteBatch class is that its Draw method doesn't know how to take a world matrix directly. Here's a an helper method to bridge this problem:

Note: The Draw method takes the parent's global transform as a parameter. There are other ways to propagate this information, but I found this one to be easy to use.

When drawing the root sprite there's no parent transform, so you pass it Matrix.Identity. You can create an overload to help with this case:

You should be able to group them into a SpriteBatch and them move it into place and rotate it using a matrix.

Codes not tested and my matrix multiplication is very rust but the technique holds true.

I would implement this a little differently.

Give your sprite class a list for its children. Then when you update the position and transformations of the sprite, also apply the same translations to the children with a for-each loop. The child sprites should have their coordinates defined in model space rather than world space.

To draw, just begin your spritebatch, call your player.draw() which would draw then loop through all its children and draw them as well.

With this sort of hierarchy, when you move the parent all its children move with it - also allowing you to move the children independently.

Not the answer you're looking for? Browse other questions tagged xna c# 2d sprites .

7
How to get mouse position relative to the map?
4
How to calculate origin and position of a weapon which should be "in hands"?
3
Passing an objects rotation down through its children
3
How to make an object stay relative to another object
1
Transformation order when dealing with Meshes
2
Relative and absolute position with sprites in libgdx
2
Child parent rendering (flash) in XNA

0
How to coordinate sprites, player's position and collisions in a Bomberman-like 2D game?
4
How to calculate origin and position of a weapon which should be "in hands"?
0
XNA - positioning after rotation
0
Implementing a multishot powerup for a top down shooter
1
Bullet entry Point around Player Object
1
InvalidCastException when instantiating a prefab on the network using Photon
0
Rotate an object with 'Quaternion.Slerp' in world space
1
2D sprite sorting and draw order relative to camera rotation