I am laughing at myself ignorant on this. Google didn't produce an obvious answer. Could someone explain what orthogonal map and isometric map are, and how they are different?

I made a picture to sum it up. Basically, the difference between both types of maps has mostly to do with the angle formed between each axis which results in one appearing to be seen from a topdown point of view, while the other appears to be seen from an angle: 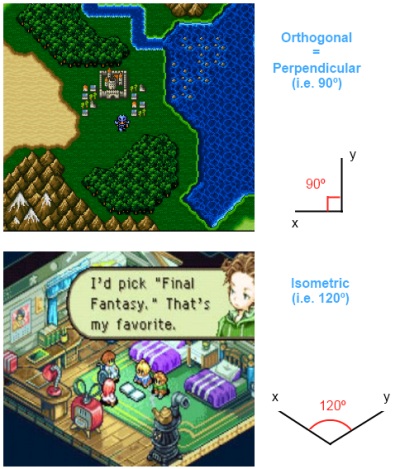 It is also worth noticing the visual difference between an isometric projection and perspective projection which is what almost every 3D game uses.

Notice how lines are drawn parallel to each other when using an isometric projection, while when using a perspective projection, lines converge towards one (or more) vanishing points.

These are examples of orthographic projections, specifically axonometric. The first is perspective.

Note that orthographic is sometimes used for instances where the plane of the object is parallel to the projection plane, such as a top-down map, however this is only a small case of what it encompasses. 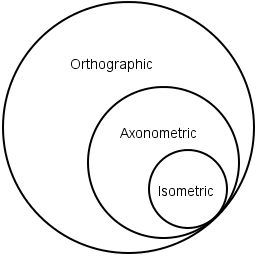 Orthographic projections are a type of parallel projection, which is not shown in the diagram.

From what I understand, an orthogonal tile map is more of a top-down style (such as this), although they can appear to have some tilt (that is, showing more front, back, side, etc). Orthogonal tiles will appear rectangular. In isometric tile maps, you view the tiles at a 45-degree angle; as a result, the tiles are generally diamond shaped (as seen here). Also see this Wikipedia article on isometric projection in games.

Sorry that I can't explain it any more formally!

I don't have time to type up a good answer, but I wanted to throw in that the difference between orthogonal and isometric maps goes beyond visual perspective in games. Maps are not just images or views in games, but have many things which happen within them and these things work differently between the two map types. Many of these differences are not seen by the user. For example, an algorithm used to determine trajectory of an arrow being shot by a player can be different between the two map types. The differences in the sprite of the arrow/shot can be considered a matter of visual prospective, but the math differs as well and is outside of the players view/perspective. While this may not answer "the" difference between the two, it describes one of many ways that the two are different outside of visual perspective.

It's also worth noting that maps in games often use many levels and groups of objects to create a specific view. How objects interact between these different layers and groups is different in the two maps as well (such as collision detection) and is typically easier when orthogonal.

Not the answer you're looking for? Browse other questions tagged maps .