I really couldn't find a correct answer while scowering all the forums for Noise Generation.

Most noise I found generated "Cloudy" textures, where I am looking for something along the lines of: 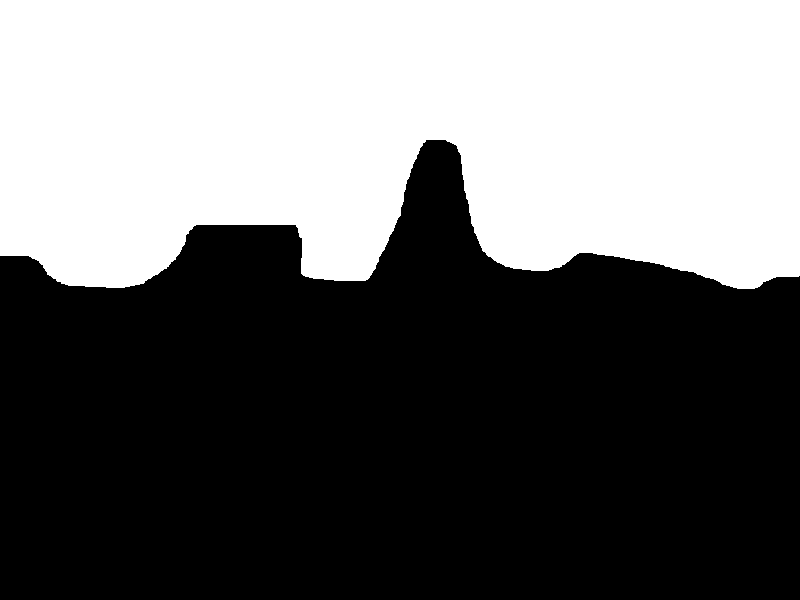 So far I have worked with Perlin Noise but adjusting my values yields no useful results.

Does anyone have any ideas?

You probably want 1D Perlin noise instead of 2D for this. Treat the noise function as defining the height of the terrain at each column, and fill everything above that height with white and everything below with black.

Randomize a set of float numbers from 0 to 1.0 (exclusive), denoting position along the x-axis. Do this once, and call these minima (they sit below the baseline). Do this again, and call these maxima (they sit above the baseline). Push each minimum down by a random amount. Push each maximum up by a random amount. Now merge the two sets into a single set, and sort by increasing x. Then join the points in order of increasing x. You could use lines, or some curve function if you want it more organic. There's your random terrain.

This alternative which might (a) be simpler to implement than Perlin noise, if somewhat more brute-force in nature, and (b) might simultaneously open your eyes as to how simple the 1D Perlin noise solution Nathan's explaining, is.

Consider a sine wave. It roughly approximates what you have in your diagram, except it's too smooth and regular.

You can generate a bunch of random sine waves. By random I mean, with random amplitudes, random frequencies, and random offsets from the origin. Then merge them. Then take only the uppermost (or lowermost) part of the combined wave functions. Then smooth the result. Now you should have some sort of an organic but irregular surface. TBH this is something of an oversimplification, and there are mathematically far better ways to merge/smooth, but you get the general idea.

This is exactly what 1D Perlin noise is. All you're doing is taking a cross-section through the noise plane that Perlin produces. Perlin noise is just a set of overlaid/merged waves which have random frequencies, amplitudes, and offsets (all of which are within user-specified ranges, being the parameters you pass to the Perlin noise function), and which operates in 2 or 3 dimensions.

So you can take either approach, and you'll get something like what you want. I'd still suggest using Perlin though, as there are no question marks there. It's a given that it'll work the way you want.

I wouldn't use noise for that.

Have a look here : http://thegoldenmule.com/blog/?p=80 for 2 different algorithms to create Scorched Earth like terrain like you seem to want.

Not the answer you're looking for? Browse other questions tagged xna c# 2d terrain or ask your own question.

49
How can I generate Worms-style terrain?

16
Terrain Generation for Tile-Based 2D Platformer
5
C# XNA: Effecient mesh building algorithm for voxel based terrain ("top" outside layer only, non-destructible)
1
Saving a list of points into a text file
1
2D to 3D perlin noise, I'm not sure I get it
21
How can I generate random maps that feel like Age of Empires II random maps?
4
Fast, simple procedural 2d island generation
0
Generation of a moon terrain
0
Unexpected white pixels when using terrain painting brush