Can I achieve a torchlight effect (lighter area around a light source) in a 2D game?

I am thinking of writing myself a simple 2D game. It will not shine with perfect graphics or gameplay at first, but I'd consider it my first step in PC game development. So, imagine such simple sprite-based 2D game (like Heroes IV or Startcraft BroodWar).

I want the gameplay to support day/night with the according lighting changes and at the same time it will be madness to have to create sprites for every lighting nuance. So, I decided adding a semi-transparent layer on top of other objects will be enough.

The issue with this solution is if I have a light source object in the game (like the hero wearing a torch, or a burning building), there must be a lighter area around it, right? Since I am putting my semi-transparent layer over everything, how would you suggest to achive the torchligt visual effect I want? Maybe redraw that layer adding 'gaps' or differently colored areas based on the lighting effect?

I don't know what you're programming in, but this is how I handled it in XNA:

Think of the lighting render target as essentially having a value for each pixel from 0 (black) to 1 (white). The shader essentially multiplies that value against the RGB values for a pixel in the tile render target to make the final drawn image.

I also have some more code here where I pass in (to the shader) a value to be used as the day/night overlay colour. This is also multiplied into the RGB values and included in the lighting render target calculations.

Now, this won't allow you to do things like block light from going around objects and whatnot but, at least for my purposes, it's simple and works well.

I've written more detailed blog posts here and here which may help you. I don't have time right now, but if you want I can go into more detail here on gamedev.

Oh, and here's a look at it in my map editor: 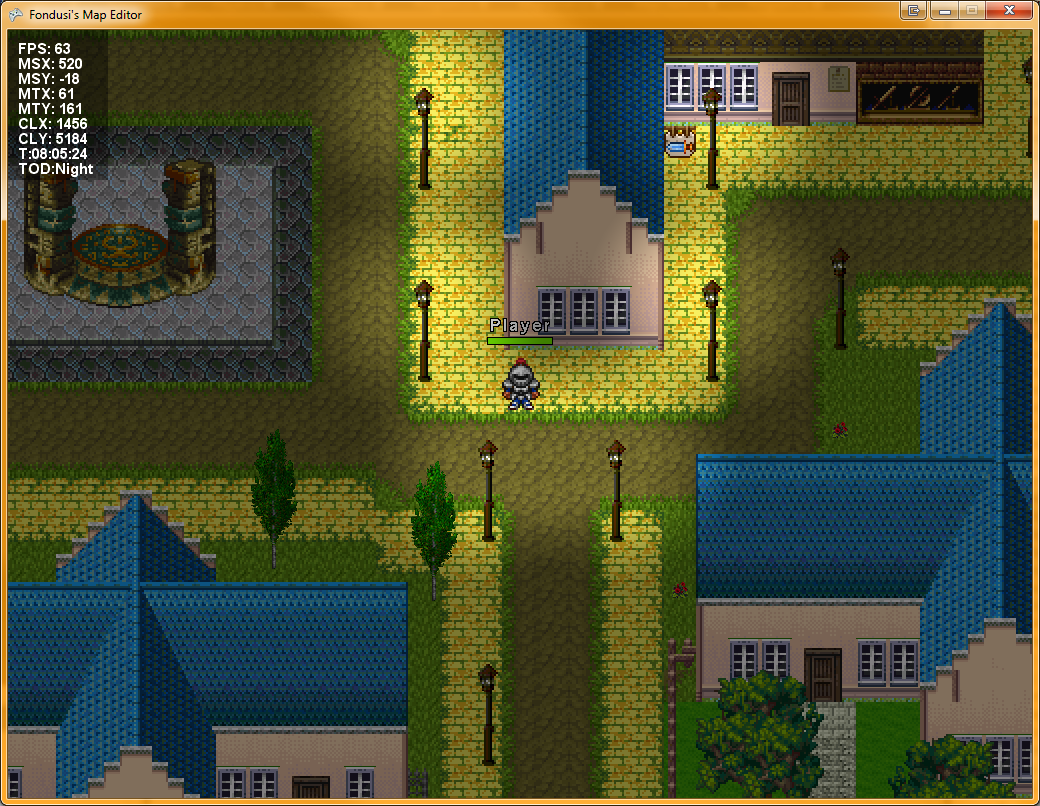 Normally, lighting in 2D games is done by having a Normal Map for all of your sprites, then calculate the 3D lighting effects on your 2D sprites. This is known loosely as "2.5D". I would however not recommend doing this in your first game as it is complex.

Here's an awesome video of someone who has done this in XNA: http://www.youtube.com/watch?v=-Q6ISVaM5Ww

That said, there are probably ways to cheat and get a pseudo-lighting system that could work with various assumptions.

It's hard to suggest an approach if you're not completely specific about the effect you're trying to achieve. Details such as if the lights should be obstructed by the environment or not, what's the point of view of your game, to what extent should the light interact with the environment, etc.

I'll drop my two cents though. See if this tutorial by Catalin Zima entitled Dynamic 2D Shadows fits your bill. As you can see, the light has a radius and does not go through obstacles. You could animate the radius and the color a little to make it look closer to a real torch light. 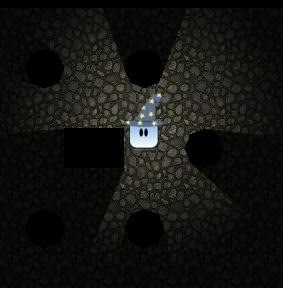 In this case, the light acts as sort of overlay on top of your scene, but does not interact with it to the same extent as in John's example, although it does take obstacles into consideration.

Catalin links to another article he used as reference, but the link is broken. Here's an updated link.

Not the answer you're looking for? Browse other questions tagged 2d lighting .

0
Is there a way to optimize this 2D lighting effect shader?
1
How to create enemy "flash-light" for 2D game?
0
How can I simulate light using mask images on the iPad?
7
Creating smooth lighting transitions using tiles in HTML5/JavaScript game
1
Simplest way to render image over top of another with another image used as mask in OpenGL?
1
2D simulating light sources (subtract a texture from an other)