How can I know how big my game "world" should be?

here is the world map (randomly generated) for a game I'm making: The green rectangle corresponds to the size of one screen. Each pixel represents 3x3 tiles in my game, this makes the whole map be roughly 7,9 km² (2,3 x 2,3). How can I assess if the game is too big or too small? 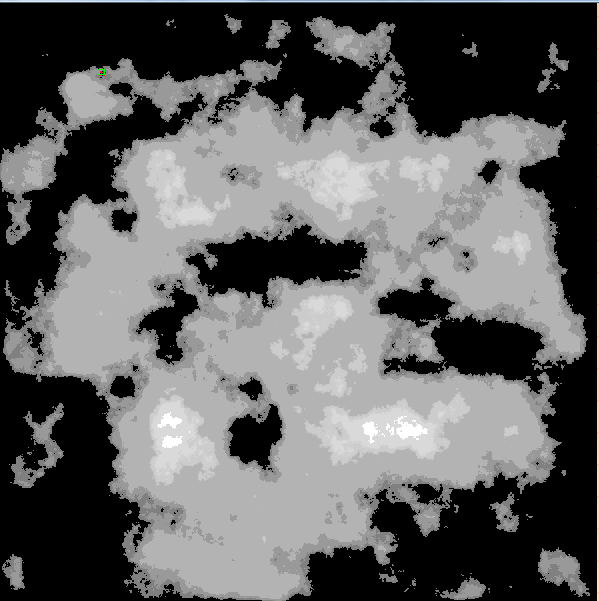 Whether a game world is too big or small depends on a countless number of factors, including:

Obviously, I could go on and on into infinity. And hence my conclusion that there probably is not going to be a very effective analytic means of determining how big a game world is; instead, you should play it and determine for yourself what feels right. When you have a good idea of what this size is, you should start asking others to play and see what they think.

Once your game is in the hands of many people, you can start collecting statistics about where people travel in the game. If most people tend to stay within a relatively small portion of your world, you may very well have a world that is too large. Conversely, if most players have visited every corner of your world, it may be too small.

Another idea is to play for a while (say, 10 minutes) and see how much ground you cover. Decide how much time you expect the average person to play. Determine how much, on average, a player should revisit a given area. With this information, you should be able to come up with a good estimate of how big your world should be. All you're really doing here is creating some rough goals and tweaking some parameters to meet them. You should still continue tweaking these parameters as you get feedback from others.

I approach games from the opposite point of view; instead of "how big should my world be?", I ask: "how small can my world be?"

If your game doesn't absolutely require a particular bit of space -- if that space isn't accomplishing something useful (thematically, emotionally, or in terms of game mechanics), then I say that that space should be removed as it is diluting and therefore harming your game.

This does, of course, require that you know what your game is about on several different levels, which some developers never consciously think about. But it's worth knowing; it's much easier to know how to improve a game (and not only in terms of its game space) when you understand the game's core.

There is a good answer for the question if you arrange your game under the premise that you want to optimize it's usability for human access.

But sometimes the fun comes from beeing initially overwhelmed so apply the principle with care.

Get your scope and the taxonomy. Scope first, i use the example of a chess game: A user chooses a piece to move (or a role in your game). The role now determines the scope of his actions. A pawn can only move so far in the game so the world is pretty big from a player using only pawns. This is the smallest scope of your game.

Keep in mind that the average human brain is able to keep a total of 5 to 8 items available in the short term memory. Basicly your gameworld should reflect that everywhere. Not more than 8 distinct locations in a town, not more than 8 kingdoms, not more than 8 item categories at once,etc... That also applies to spatial movement. Depending on your world it might not always be trivial for a designer to get the information on what the user will actually store in his/her short term memory.

No route should be more than 5- 8 user interactions long. If your game gets more complex than tiles/travel clicks you might want to think in other measures like "no more than 5-8 landmarks to travel" instead of 5-8 turns. You will find that this number is actually lower for alot of modern games. The Witcher 2 for example places most of the quests in the close proximity to just a few landmarks per world.

Create a tree and place all your spatial locations in a taxonomy of your choice where no element has more than 4-7 siblings. For example you have 6 continents with 6 large countries with 5 cities with 6 shops.

Each sibling and the parent´should be reachable by travel within 5-8 distinct movement interactions. (i.e. walk to that large tree, then turn right to the street until you see the big swan. Enter the golden door, first door on the left). The pawn needs to travel one unit of scope at a time where the queen would be able to travel most of the distance in a few turns. That's not only the size of your gameworld but also a very nice progression and reward arc possibility for your users.

It's totally feasible to change movement interactions when travelling in another magnitude of your spatial locations. Simple example: Travel by ship, foot, aeroplane.

Similarly to Trevor's answer, perhaps you could work backwards, starting from the question: "How big does my world need to be in order to accommodate X, Y and Z?"

X, Y and Z here are of course your game's contents. They can be cities, or distinct areas, or targets, and so on. Unfortunately a lot of work may need to be done before you can reach even having a list of X-Z; you may even end up with A-Z and still not be finished! But once you know what your game is going to contain, you might then be able to make the world "just big enough", possibly with enough "breathing space" for some DLC or updates.

I look forward to finding out how you eventually decide to proceed. Good luck!

Not the answer you're looking for? Browse other questions tagged game-design game-mechanics maps world-design or ask your own question.

2
How to Create a Grid for a 2D Game?
27
How can I identify feature regions in a procedurally generated world?
23
How can I create a random "world" in a tile engine?
3
How can I load a large tile map with cocos2d?
3
How to zoom randomly generated maps?
5
Scaling a game world both for realism and for mechanics
1
How do I manage persistence in a 2d tile-based world that uses a chunking algorithm?
2
HTML canvas how to create big game world and show only a part of it on canvas?
2
How can I make a seamless transition between maps?