How can I implement hexagonal tilemap picking in XNA?

I have a hexagon tiled map in which I need to check when a hexagon is clicked. The hexagons aren't actually touching, rather they have a slight gap in between each of them.

Does anyone know how could I go about checking whether a hexagon is clicked without over complicating the whole thing?

Take a look to this picture 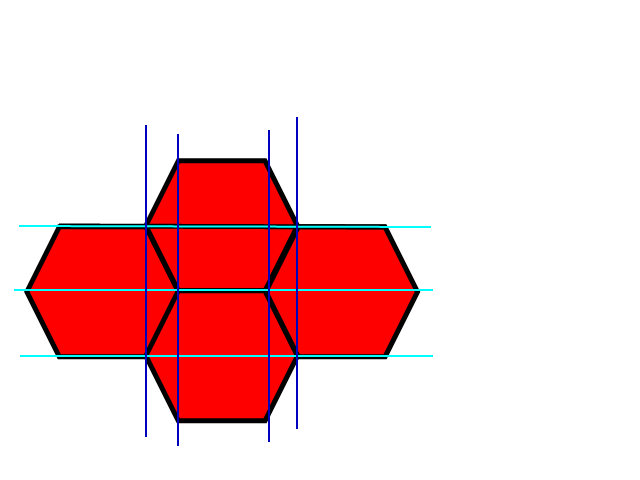 As you can see there is a relatively intuitive way to map x,y rectangular coordinate system to the hexagonal one.

A rect hexagon can be defined by the height and width of the circumscribing rectangle plus the width of the inscribing one. (W,w,h) 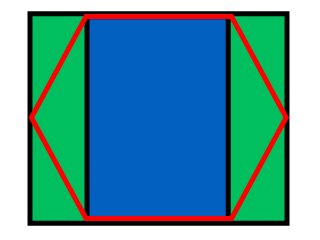 The easiest way to find out the hexagonal index is to partitionate the space as follow: 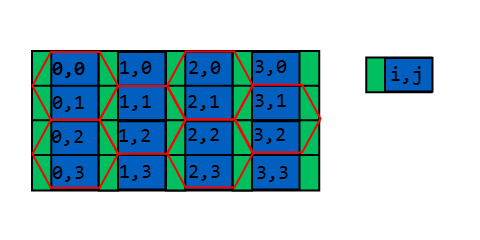 u and v are the reminder coordinates that indicates where the point is whithin the i,j rectangle: Using w we can say if we are in the green area (u < (W-w)/2) or not.

In both cases it is usefull to trasform u and v so they vary between 0 and 1:

if we are in the lower half and v < u

then we decrement i by one 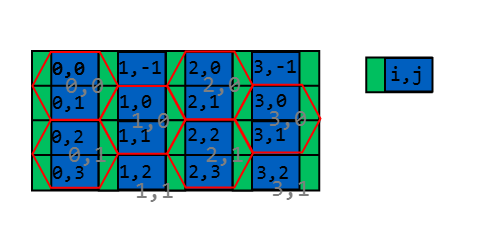 Here are the parameters of one hexagon. Its centre is in O, the largest width is 2a, the height is 2b, and the length of the top edge is 2c.

This is the row/column layout, with the origin at the centre of the lower left hexagon. If your setup is different, translate your (x,y) coordinates to fall back on this case, or use -y instead of y for instance:

The following code will then give you the row and column of the hexagon containing point (x,y):

Edit: if your coordinate system merges rows 0 and 1 into a single row, as well as rows 2 and 3, and so on, then you can adjust it using this formula:

You could fit 3 rotated rectangles inside the area of the hexagon, and if done properly it would fill the area exactly. Then it would be simply a matter of checking for collision on the three rectangles.

You probably don't need to de-register clicks between the tiles. That is to say, it won't hurt and might even help the player if you allow the spaces between tiles to be click-able as well unless you are talking about a large space between them that is filled with something that logically shouldn't be clicked. (Say, the hexes are cities on a large map where in-between them are other click-able things like people)

To do the above, you can simply plot the centers of all the hexes, and then find the nearest one to the mouse when clicked on the plane of all the hexes. The nearest center on a plane of tessellated hexagons will always be the same one you are hovering over.

I've already answered a similar question, with identical goals, over on Stack Overflow I'll repost it here for convinience: (NB - all code is written and tested in Java) 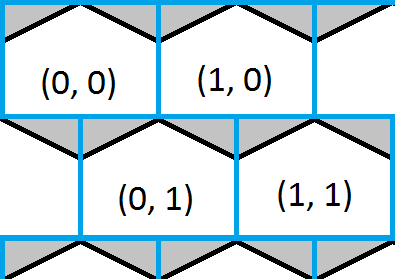 This image shows the top left corner of a hexagonal grid and overlaid is a blue square grid. It is easy to find which of the squares a point is inside and this would give a rough approximation of which hexagon too. The white portions of the hexagons show where the square and hexagonal grid share the same coordinates and the grey portions of the hexagons show where they do not.

The solution is now as simple as finding which box a point is in, then checking to see if the point is in either of the triangles, and correcting the answer if necessary.

At this point we have the row and column of the box our point is in, next we need to test our point against the two top edges of the hexagon to see if our point lies in either of the hexagons above:

Having relative coordinates makes the next step easier. 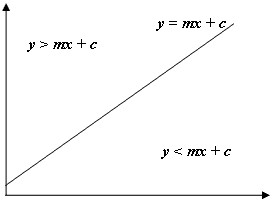 Like in the image above, if the y of our point is > mx + c we know our point lies above the line, and in our case, the hexagon above and to the left of the current row and column. Note that the coordinate system in java has y starting at 0 in the top left of the screen and not the bottom left as is usual in mathematics, hence the negative gradient used for the left edge and the positive gradient used for the right.

A quick explanation of the variables used in the above example: 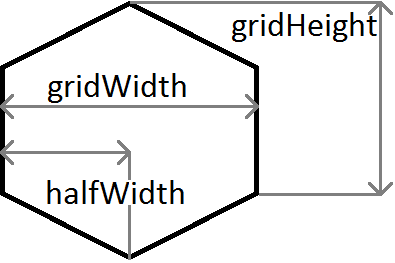 NeoShamam's addition to the above

This is an addendum to SebastianTroy's answer. I would leave it as a comment but I don't enough reputation yet.

If you want to implement an axial coordinate system as described here: http://www.redblobgames.com/grids/hexagons/

You can make a slight modification to the code.

If all your hexagons are made using the same proportions and placing, you could use some sort of overlay asset for the collisions, something along the lines of:

Then, all you have to do is place the collision image where your hexagon is, get the mouse position relative to the left corner, and see if the pixel of the relative position is NOT white (which means there is a collision).

You could obviously perform a rectangle collision check beforehand (of your whole hexagon image) to improve performance of the whole process.

The concept is quite simple to understand and implement, but only works if your hexagons are all the same. It could also work if you only have a set of possible hexagon dimensions, which would then mean that you would need more than one collision overlay.

If find it to be a very simplistic solution to what could be a lot more complete and reusable (using maths to really find the collision) but it's definitely worth a try in my opinion.

There's an article on Game Programming Gems 7 called For Bees and Gamers: How to Handle Hexagonal Tiles which would be exactly what you need.

Unfortunately I don't have my copy of the book with me at the moment, otherwise I could have described it a little.

Not the answer you're looking for? Browse other questions tagged c# xna hexagonal-grid .

0
How to detect a cursor inside a non-rectangle shape
3
Creating a frozen bubble clone
1
Bubble shooter clone, structure for storing/adding of bubbles

6
How to generate seamless hexagonal textures
10
Screen space to world space
2
Collision detection with XNA and TiledLib
5
XNA 2D: How to load/unload specific content by level
3
XNA - Making 2D Hexagons Connect With Each Other
0
Collision detection with moving tilemap
2
SDL_RenderDrawLines isn't drawing complete geometry
0
How can I find if there is a gap/s between transforms array?