How do I determine if a given grid coordinate is fully within a triangle?

I'm using Unity's Grid system, and I'm drawing triangles on the grid. Each triangle is recorded as a Vector2Int origin point and a List of three Vector2Ints recording its relative vertices, for instance:

It's a bit weird that the origin is on the bottom of the triangle but it's for an in-game reason - a character is meant to stand there. I can redefine the origin point to elsewhere in the triangle if needs be.

The above code would generate a triangle as follows: 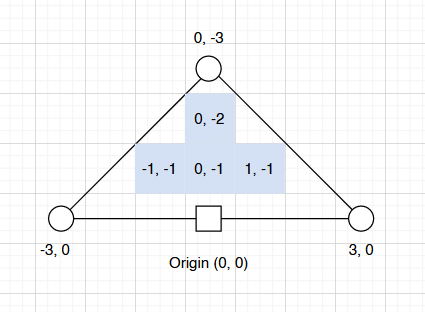 I'm completely stuck on how to find out whether a given Vector2Int (i.e. an integer x,y position - this is presumably an engine-agnostic problem) is fully inside the triangle. These four squares are marked in blue on my sketch.

You seem to be using the centre point of your square as the reference, so I will follow that convention (I'm not familiar with Unity's conventions about this).

You just need to check three inequalities, one for each of the sides of the triangle. Assuming i,j is the centre of your square (I'm using i and j because I want to leave x and y free to show my working):

For the rotated case, you can just rotate to this coordinate system and do the checks, or have 3 other cases similar to this one.

2
Best way to create a 2D right-triangle grid
2
3D Translation using only distance and angles
2
Determine if set of connected tiles can fit inside grid
1
How can I delete parts of a mesh in Unity?
2
Terrain Collision problem
2
How to calculate all points in a 2D grid defined by an arc, given a starting point and range
0
(Unity3D) Determine If Ray Intersects Given Rectangle
0
How do I determine the player's grid position?