How do I implement this distortion ripple effect?

I would like to implement the following running effect in Unity. When the player character moves, it creates some sort of rings around it to give the impression of high speed.

I have searched for shockwave effects, ripple effects, water-drop effects but I either (1) could not get them to work on a specific region of the screen (most were post-processing effects that work on the whole screen), or (2) they did not look like this one.

I then tried to reverse-engineer this effect -- visually that is. I grabbed a screenshot of the player movement and it shows the following. 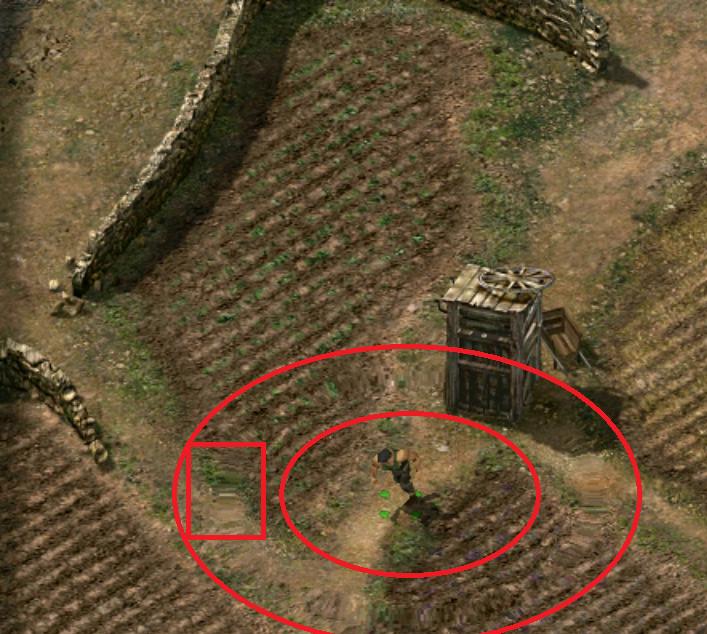 So basically I noticed a ring around the player where the terrain image is distorted. I have constrained that ring within the red ring to show it better. I have also added the red box to bring your attention to the image distortion I am talking about.

So my naïve interpretation of this effect is that it creates few rings of increasing size around the player, and it shows them one by one over time.

This kind of reduces my problem to creating one ring that blurs the terrain image like shown in the screenshot: some sort of elongated blurred pixels.

Now, I know next to nothing about shaders. I found this page (How to apply Image effect only on specific part of objects?) that implements a pixelating shader that can be applied to an object. So I used it as a starting point. I now have this ring: 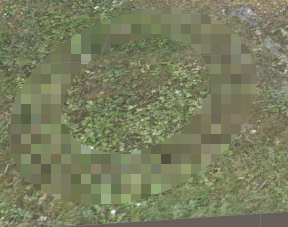 and I need help changing the following shader function (taken from the previous link) to show the kind of distortion I want.

Any help is very much appreciated.

You normally do these things as a screen-space effect, by sampling the camera's opaque texture (if you use shadergraph, that would be the scene color node).

If you'll forgive me the lack of actual code, the general idea is to create a transparent mesh for the effect which is colored by sampling the opaque texture, using the screen-space coordinates of the fragment plus some offset. The offset is what creates the distortion.

In order to find the offset you could use the UV coordinates of the fragment. In this case, where the distortion is radial, the offset could be something like

To fully recreate the effect you show you also need to animate this, but I think this should be enough to get you started.

Okay, so here's my shadergraph version of a very similar thing.

The most important part is this:

That is where the opaque texture (the scene color) is sampled. Basically, you want to figure out which pixel this fragment would be rendered to, and sample the color of a different pixel, with a relative offset. The offset, in this case, is calculated from the UVs. For that to work, you need a mesh that really has UVs (0.5, 0.5) at the center. Kind of like this:

Other than that, what the shader is doing is calculating a donut-like mask by combining multiple sphere masks (well, circles, really, but whatever), so that the entire thing is not getting distorted at the same time. By changing the parameter t, you can make it flow from the center outward.

Don't be scared by the fact that this uses a custom sphere mask node. The built-in one would work just fine, it's just that I'm insufferable and I needed to make it so that the effect starts exactly at t=0 and ends exactly at t=1.

The other thing you might see is a billboarding node in the vertex shader, but that really is beyond the scope of this question, I think.

PepeOjedaPepeOjeda
2633 bronze badges
New contributor
PepeOjeda is a new contributor to this site. Take care in asking for clarification, commenting, and answering. Check out our Code of Conduct.
\$\endgroup\$
5
Add a comment  |

Not the answer you're looking for? Browse other questions tagged unity shaders graphic-effects image-effects .

0
How to apply Image effect only on specific part of objects?

4
How do I make the screen shake when the player takes damage?
1
Curved Meters and Gauges
3
Selective Image Effects with Stencils
2
How to implement a pixelated screen transition shader?
0
How to destroy a clone of an effect attached to an object?
0
Unity's Box Collider isn't preventing an object from falling through the floor
0
Which image effect is this?