I want to detect when a Child's collider is being triggered to apply the damage to the thing being hit. But currently I'm confused about how it works.

Does the Parent's OnTriggerEnter detect the trigger events of the Child Object ? And how do I know the trigger come from the Child and not the Parent, and know which Child's collider got triggered? 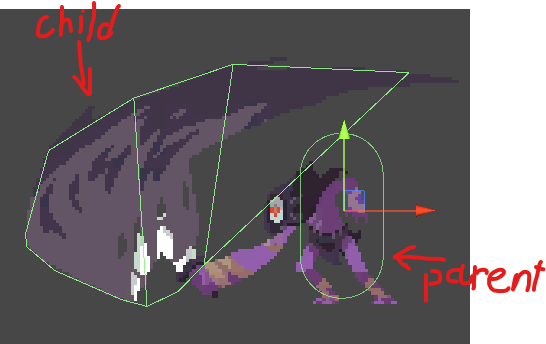 Triggers don't create OnTriggerXXX messages, only rigidbodies do. If child doesn't have a rigidbody, basically its collider is considered a child collider of the parent node (compound collider). Now we come back to the question:

Does the Parent's OntriggerEnter detect the trigger event of the Child Object ?

If child object doesn't have a rigidbody, yes.

And how do I know the trigger come from the Child and not the Parent and know which Child's collider got triggered ?

They need their own rigidbody and script with OntriggerEnter, which is not recommended.

In fact, you don't need to get the physical events from the attack box, simply set it to another layer, such as "attack", and all attack events are handled by the attacked party (character's body, with rigidbody and script, layer "be_attacked").

20
How to detect collision occurring on a child object, from a parent script?

5
How can I stop transform.position from being modified when adding a child object?
1
Trigger for Melee-attack not working
4
How can I determine which Trigger is hit?
0
Raycast does not detect child layer if parent layer is set to ignore
1
ContactFilter2D does not detect a trigger even with "use triggers" enabled
0
How to know which child collider triggered in parent?
0
Unity Collider2D - Know the collider type ob the object collider with the other object
0
How to do collision detection in Unity between Character Controller, Rigidbody Collider and a NavmeshAgent?