How to format bespoke struct, so that it appears like Vector3 in Unity Editor inspector?

I have a bespoke struct, which has XYZ variables just like Vector3, but unlike Vector3, the inspector does not display them neatly and horizontally. I have tried to read documentation and copy Vector3 to no avail. Please tell me how to make my custom struct display XYZ in the inspector exactly like Vector3. Below is a screenshot from the Unity editor to show the difference ("Test" is a Vector3, Position is my own class). 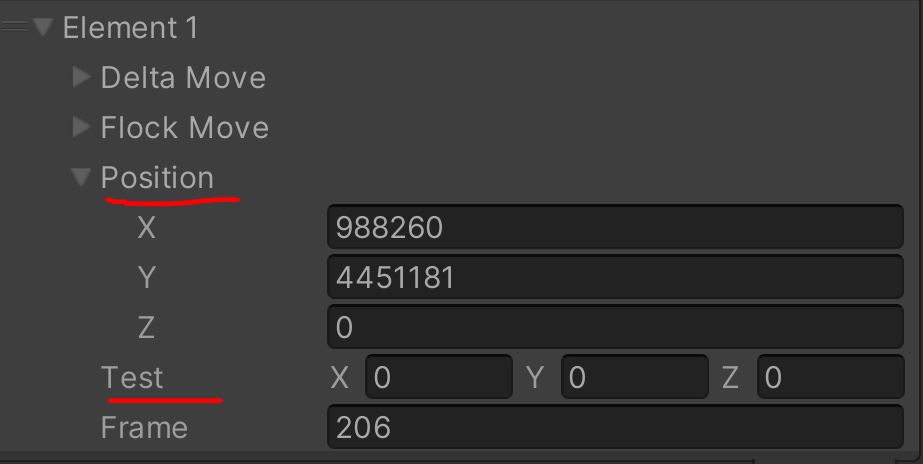 As Zibelas noted, you can use a custom property drawer. However, let's analyze why you are making a custom struct with the same fields as a Vector3 (or why you probably shouldn't).

If your struct functions exactly the same as a Vector3 (or Vector3Int), there's no point in using it over Vector3, since Unity's APIs make extensive use of Vector3.

If your struct behaves like a Vector3 but adds new functionality, you should strongly consider using extension methods or helper functions instead. For example, let's imagine you want a way to swap the X and Y values for some reason. One way to do this is with extension methods:

This adds a new function to Vector3 which we can use like any other function! Note that I used the ref keyword because Vector3 is a value type and in this example we're modifying the original value.

Alternatively, we can use static helper functions:

So when should you consider creating your own struct?

8
Custom Editor - keep default look but add more
1
2DRaycast is shooting slightly in wrong directions
1
Unity / How to Hide "Editor Script" in the Inspector?
2
Why does Unity require an EventSystem component for input during a play-test, where input works fine without it in a build?
0
Sprite Image in Canvas not displaying correctly (distorted)
0
Unity 3D - Have a Vector3 attribute on inspector that behaves as GameObject's Transform position Vector3
0
Shooting weapons Unity
3
Unity editor, horizontal line in inspector
1
Unity custom editor - nested Property Drawer is getting Enum names for the parent property, instead of the child