The scripting engine of Skyrim (and Fallout 4) has an interesting function called FindClosestActor(x,y,z,radius). If you call it with x,y,z center coordinates and a radius, it returns the closest Actor (entity) in the given radius and if it fails to find any, it returns nothing.

The most common use-case would be for such a well-named function is to find Actors around the Player in a specific radius. Lo and behold, Player is also an Actor therefore you always get Player as the result of the function, making it completely impractical.

There are exactly two functions that can be used for finding an Actor in a given radius. Their (pseudo-)signature is the following:

Question: How can I find the closest Actor to the player in a close to optimal (least function calls) way using FindClosestActor and optionally FindRandomActor? How can we overcome the defective behavior of FindClosestActor?

Method I refuse to utilize

It relies on random too much. What if it was badly written internally? I think the only useful property of this algorithm is that if there are more than 1 Actor most of the time, it returns a non-Player Actor with 2 function calls with a 75+% reliability.

Legend:
A1, A2: Actors where A2 is closer to the Player than A1
R: position where we find the closest actor
RP: Distance between R and P
P: Player
B: circle around P at distance "base radius" 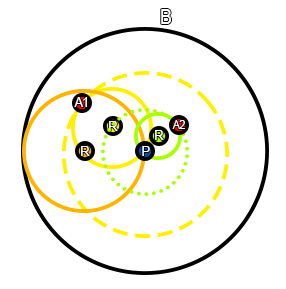 There are two issues with this algorithm.

Still not convinced that such a nondeterministic algorithm would be reliable but at least this one spends calculation time on really close Actors first.

I'm not familiar with CreationKit, but it looks like FindAllReferencesWithKeyword might be a better way to solve the problem. The documentation gives an example that returns all of the actors within a certain distance of the player & then removes the player from the results:

After that, it should just be a matter of searching through the array for the closest element:

Again, I'm not familiar with this scripting language, so there might be some syntax errors in the code above. I checked against examples in the reference, but I'm if it looks like I made a mistake on something, feel free to comment &/or edit in a correction.

Not the answer you're looking for? Browse other questions tagged algorithm geometry optimization skyrim-modding .