I'm making a 2D top view game (same perspective as the game Forager) in Unity. I want the game to be visually appealing, and want to add some details like dust particles. Whenever the character moves, I want dust-like particles trailing behind the character, almost as if the character is kicking up dust. 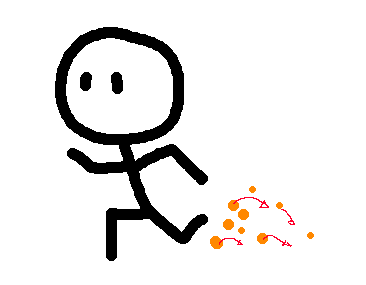 The particles are a little big in Forager, but this is similar.

I've used Unity's trail renderer before, but I only used it for making a straight line, and not multiple random particles like this. What should I do to achieve this effect?

Just general guidelines would be okay. I don't necessarily need a complete code, just some guidance because I don't know how to start.

When you are using the URP or HDRP and feel adventurous, then you can alternatively use the new, graph-based particle system.

Not the answer you're looking for? Browse other questions tagged unity particles trail-renderer .

38
How do I create particles that react to the player and enemies?
0
2D particles with a perspective camera?
0
Changes to one Unity trail renderer causes all of them to flicker
0
Need some advice on how to decide where to implement my enemy behaviours
0
Particle systems and sprites, draw order issue
0
How to achieve dotted trail behind moving object with use of Trail Renderer?