How to calculate distance for A* when searching a path on navmesh?

I've read a couple of articles on Navmesh+A* navigation. So, I'm trying to implement a pathfinding for an RTS type of game. However, it seems I don't understand how to calculate a distance for A* when searching a path on navmesh.

I cannot really calculate distance between centers of navmeshes because in that case I don't get the best path. 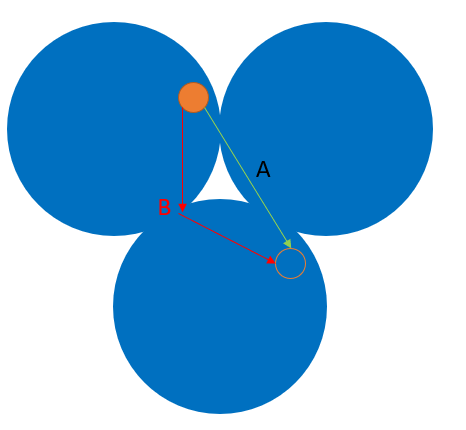 Here I have three navmeshes interconnected with each other. If I need to move a unit as illustrated in the picture the optimal path is obviously the green one.

However, if I calculate the distance between centers of navmeshes when I use A*, the path would be calculated as red in the picture.

So, how do I account for entry and exit point in navmeshes when calculating the distance for A*?

When you say you want to calculate the "distance for A*", you mean the heuristic, right? The heuristic is an estimate of the distance. And you want to avoid overestimating it. See Admissible heuristic.

However, if I calculate the distance between centers of navmeshes when I use A*, the path would be calculated as red in the picture.

This could happen if you overestimated the distance. The distance from the centers of the navmeshes can be longer than the actual distance, so that can happen. Although you still got a valid path.

By the way, I imagine you are doing something like this:

So, how do I account for entry and exit point in navmeshes when calculating the distance for A*?

You can pick the exit that is closer to the other point. Closer as measured in a straight line. That might not be the correct exit, but it would avoid overestimating the distance (assuming you have convex areas, which is how these systems work). Which makes it an admissible heuristic.

However, it is not necessarily a better heuristic. We want to make sure we don't overestimate, but we want to underestimate as little as possible. We can make it better if we add the distance from the point to the exit we picked.

Not the answer you're looking for? Browse other questions tagged path-finding rts navmesh .

2
Pathfinding with MicroPather : costs calculations with sectors and portals
4
Which pathfinding algorithm should I use for multiple enemies and tower placement?
8
How to do starcraft pathfinding?
4
Unit turning in navmesh-based pathfinding
1
How to force a sub-optimal path
0
A* Quad/Oc Tree path-finding vs Navigation Mesh path-finding
1
Recursively calculate possible pathway on a grid depending on max walk distance
0
How to move player along navmesh link's curve?
0
Distance Cost for 3D A* Algorithm