How to calculate player damage in a game

I'm developing an RPG and I want to do the damage calculation in my game.

I have for example the following situation:

Very close to be "more suited for a forum" but still answerable.

When designing damage formulas and related mechanics, there are well tested approaches. As we have now an entire universe of games to analyze.

First: I have seen Attack + Skill but mostly on RTE games or top down action RPGs. While Character.Strength + Weapon.Attack is more common for RPGs/JRPGs. We are still missing target's defenses/resistances/armors.

It is better to multiply/scale Character.Attack/Strength rather than add Skill.Power to it. Otherwise your skill will became obsolete in late game, and you will need a growth system that gives your Character more powerful skills with time, so player stop using obsolete skill in favor of the newer ones.

And this damage skills going obsolete is very common in JRPGs. They do this to give the player a sense of progression. In those games, you need the leveling, but also the skills. Raw stats alone won't be enough. You need both.

A notable example of this are most 2D Final Fantasy titles.

Add the weapon power to the Character attack/strength is more acceptable, as weapons are OK to became obsolete in late game, forcing the playing to buy more expensive weapons.

Western RPGs are more tactical, in average. A damage skill may have a stronger version, but this doesn't have to mean the previous one is obsolete. It may still be useful because it costs less MP or whatever.

There is also the possibility of leveling skills rather than learning new ones. The idea here is that different skills must do different things. If you just want more damage, but same effect, then just level the same skill, don't learn new ones. Think Diablo/Torchlight.

This is what happens when you use the + operator.

HP also levels by this formula.

Note: this is for simplicity. But nobody does this kind of leveling. Notes on this at the end.

Let's take some time to wonder why magical damage is raw. Because we don't have a stat for magic casting. In our worldbuilding, magic doesn't depend on a Character' stat. Who knows the most powerful spells wins. And yes, this was done before, in Earthbound, PSI (magic) abilities do raw damage, with a random variance between a minimum and a maximum, and magic defense doesn't exist.

We will introduce variance based on Character.Luck latter.

Then let's look how the damage becomes obsolete with leveling. Assuming same Character and Enemy level. Let's look at the turns requiring to kill a foe. Note: if your game is real time, it's possible to extrapolate damage per turn to damage per second. 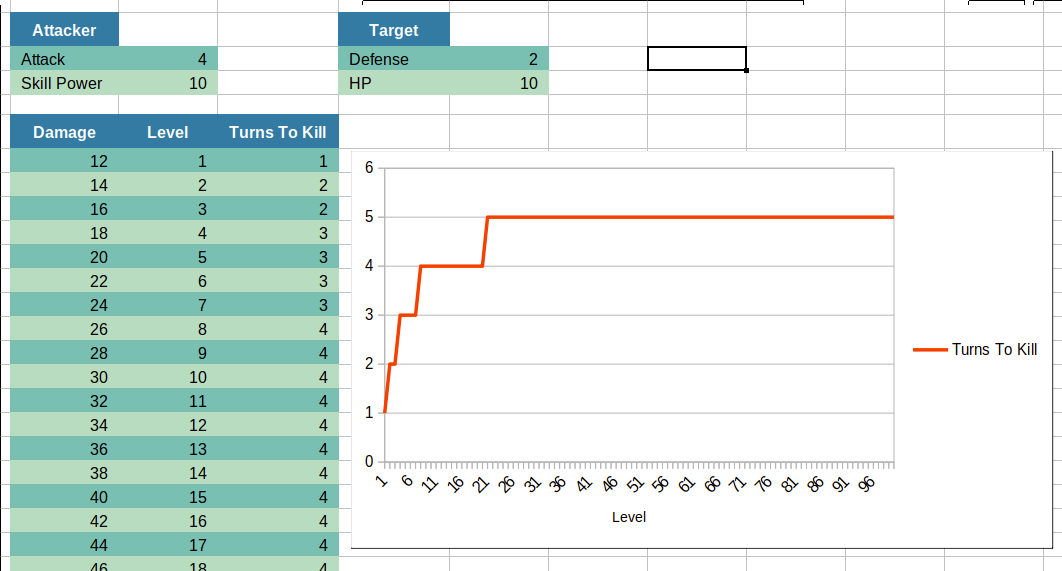 The same foe, as long as levels match, takes more turns to be killed by the same skill in late game.

Your game may or may not be OK with this.

If not OK, then you have some options: allow skills to gain levels too. There are real world examples of this system. Think in Skill Trees of most MMORPGs out there, where you can expend skill points in skills you already learned, to make them stronger.

Doing this you can compensate for the numeric effect shown in the graph.

Now let's hack the damage formula. We can make Defense a division, but for simplicity, let's change one thing at a time. 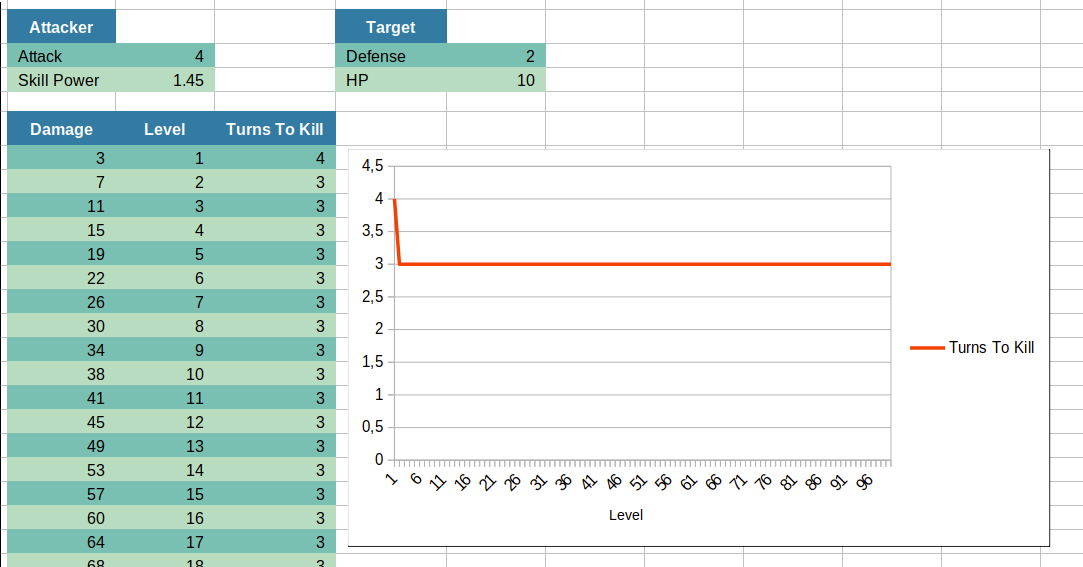 Ignore that a level 1 it takes 4 turns to kill the foe. That's a rounding artifact. I forced all damages to round down, and all turns to round up.

What that graph shows is that, as long as there aren't other factors like equipment (armor/weapons) at play, the same foe, as long as levels match, will die in the same amount of turns.

I think that is a lot more "elegant" from a mathematical point of view. I like more this damage formula.

There are room for improvement. Try this: do your spreadsheet, but use this damage formula: Character.Attack * Skill.Power / Target.Defense

Also watch for the negative damage artifact. With the subtract defense formula, you may heal the target, in place of damaging it, if defense is too high. In this case, just code an extra if at the end of damage calculation, and round to 0 if value is negative.

While a division will never change the sign of damage. But watch for other parts of your final damage formula that may.

You still may add skill leveling to your design, but it will be to match lore, or because you think it gives player something extra to do. But not because you need to fight your math.

There is room for improvement.

Most games also have the concepts of elemental attacks. Imbue weapons. Etc.

In PokeMon there isn't variance in damage calculation except a move has a unique mechanic. There are such moves.

But in most RPGs out there there is variance as a way to add uncertainty to action outcomes.

Where Math.random is your favorite runtime random function. And Damage is a variable already containing a value as result of your damage formula.

This is a good place to give that Luck stat a reason to exists.

You can make luck affect the variance somehow.

In this case, we use Luck to shift the lower limit of variance to the right. You may do the same for the upper limit, if you want.

MAX_POSSIBLE_LUCK is a constant. And is must be set to the max allowed LUCK, for a legal, non hacked, character in your game. And here is our first problem. This requires you to know your max allowed legal LUCK in advance.

Mechanic has implied narrative or must be coherent with lore

This is an open debate. Some say yes, some say no. I say yes.

What exactly is Luck?

Because I understand Strength. It implies the Character has big muscles.

And I also may understand Attack. It is more general, for better or worse. It implies the Character does more damage with physical attacks but it doesn't tell us exactly how. It may have big muscles, or it may use its martial arts knowledge to compensate the lack of muscles/size and hit as hard as a very tall person.

Now, while I don't really get Luck, its use is common. Truth be said.

For Fire Emblem (I don't sure if all of them, but at least the 2D ones). Luck is used in Critical Hit Chance calculation:

I think it comes from Tolkien's: "Luck is also an skill". He didn't invented it, its common belief, but I'm sure it got to gamedevs thanks to him.

Be digital, not analog

In my experience, players don't notice oscillating values. Think in analog radio signals. They won't notice a stat is affecting something analog. The only way they will notice is if you tell them with a help text in your game gui.

Global variance is OK. But nobody will notice if a stat affect it.

The mechanic of Critical hits comes to the rescue.

Refer to the Fire Emblem formula once more. The analog part is hidden in the game code. The player will get a digital, binary, experience. It's critical or not critical. But they will notice that more Luck affect the frequency of critical hits.

Said all that, all game is unique. Just do what you feel.

base_stat * level isn't good. Nobody does that.

You can define your character structures as a set of initial and maximum stats. The advantage of this, is that you know, and control, the final shape of your characters. Then level will change a stat from minimum to maximum in steps of 1/100. This, assuming you want to cap at level 100.

You can tune the "growth formula" to include some form of easing. But I think it's not needed.

Note: It's not a good idea redo the numeric simulations shown in graphs with this new proposed leveling system. Because with the simpler stat * level formula, a characters is, to other characters, always the same as long as levels match.

But with the new leveling system, depending of how you shape two characters final shape, the distance between them may get smaller or bigger, as they approach to their final shape. This would introduce "noise" in the graphs if we only want to analyze the damage formulae.

It appears that you came up with an array of stats first, and now try to figure out what those stats could be doing.

I think you might be approaching this problem from the wrong direction.

The way I would approach the design of an RPG combat system is:

That way I would not end up with the question "I got that luck stat, what could it do?". When I don't have a use-case in mind, then I would not create such a stat in the first place (more ranting from me about the uselessness of a luck stat here).

When you never designed an RPG combat system before, then I would recommend you to start with the most simple possible system and iterate from there:

When you implement this and try it out, you will realize that it's not a particularly interesting system (although in some cases where the main appeal of the game lies elsewhere, it might actually be enough). Especially because the result is a foregone conclusion: The one with more HP wins, when it's a tie the winner is the one who moves first. How could you iterate on the idea to make it more interesting?

When you go through this iterative process until you have a fun combat system, you are going to end up with more or less stats, but you will have a reason for each one to exist and you will know what it does.

Not the answer you're looking for? Browse other questions tagged game-design algorithm rpg .

37
How to design the attack class in an RPG game?
126
How to develop RPG Damage Formulas?
6
What underlying character stats would you put into your "character" object in an RPG engine
9
RPG Formula - Attack and defense
6
Distributing damage across units in an army
8
How to design a damage formula in an RPG which keeps weapons with different attack speeds balanced?
5
Browser RPG fight calculation formula
1
How to calculate suitable attack speed
1
Passive skill for balanced race / faction