I have just started working with Unity2D to simply learn how it works. I've been trying to get grid-based movement and collision with a tilemap working, and it's mostly there, but there's one bit that's not quite right and I'm unsure as to why.

Currently, the player sprite is moved in a grid-based fashion. When it approaches an obstacle, the movement script uses Physics.OverlapCircle, filtering on the collision layer, to determine whether the player can advance to the next grid cell. This works, save for the fact that it appears to be using the entire bounds of the sprite for collision detection, whereas I want to allow the top portion of the sprite (i.e. the head) to overlap and actually detect collision with the lower portion (the body). 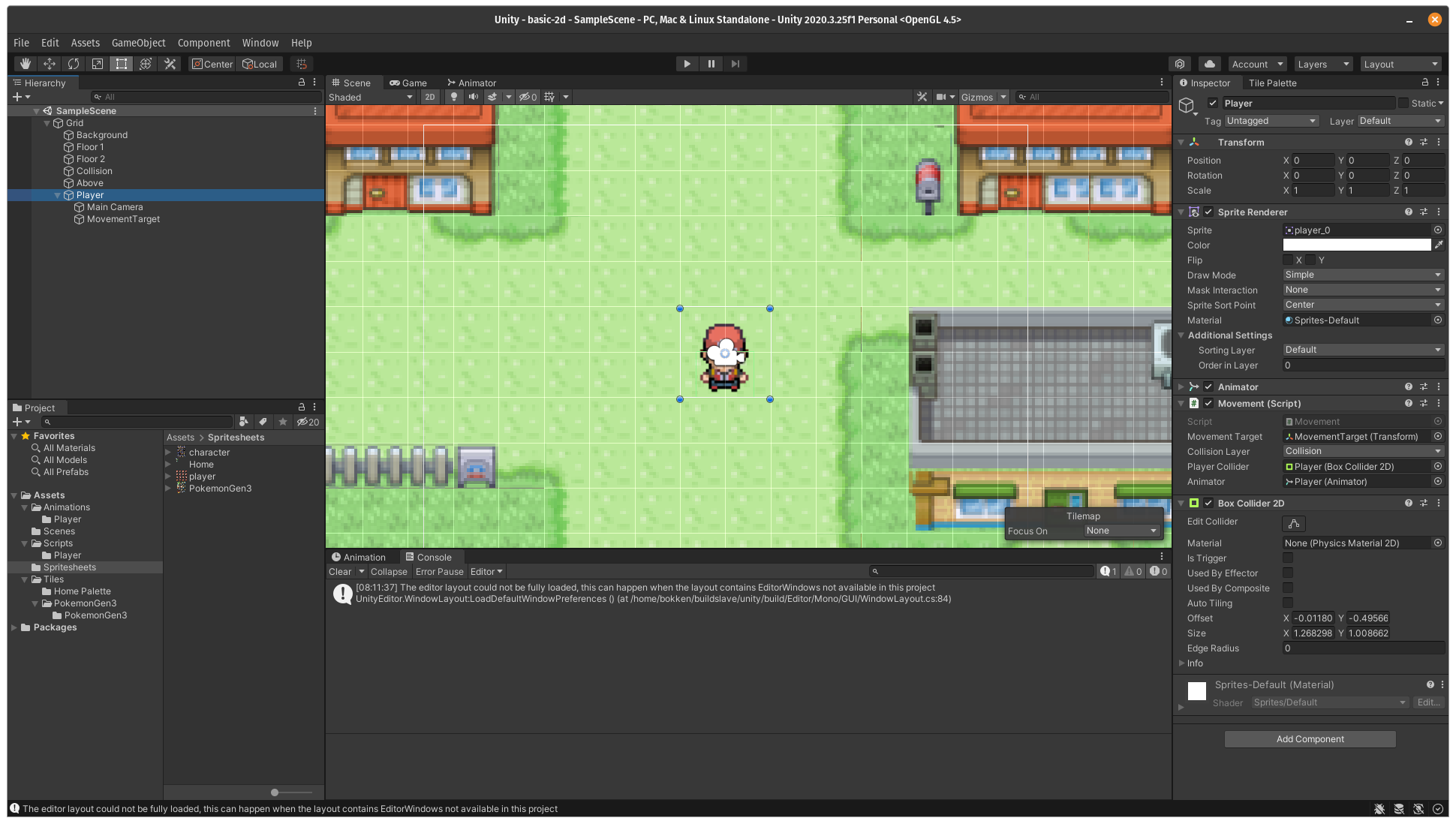 Here is my movement script, as well. The method at the bottom of the file, CanMoveToTargetPosition covers the overlap logic.

The tilemap has an attached TilemapCollider2D component. I've tried including a RigidBody2D with a CompositeCollider2D, but this actually makes the result worse - the player collides with some parts of the collision layer, but can walk through others.

I've tried using a BoxCollider2D to allow me to define the actual collision area on the player, but I don't seem to be able to then get the overlap collision working with the tilemap.

Here is a view of my collision layer with the tilemap collision areas defined: 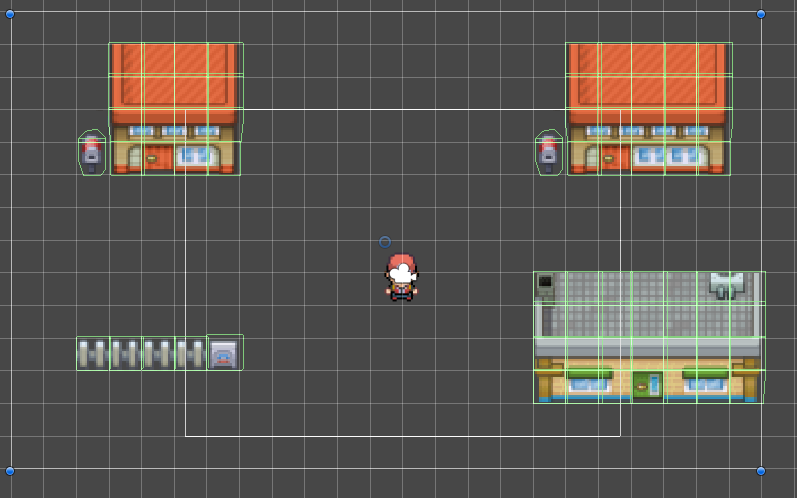 Finally, you can see a recording of my issue as a GIF or MP4.

I'm sure this is more to do with my lack of understanding of how the physics overlap, or colliders work in Unity, but I'm struggling to find any resources to help with this specific issue. So, any links for further reading would be appreciated! I did manage to get non-grid-based movement working with collision detection by just using a Rigidbody2D and BoxCollider2D on the player, and TilemapCollider2D, RigidBody2D and CompositeCollider2D on the tilemap. But I would like to retain the grid-based movement.

Any help would be appreciated! Thanks.

In Unity, you usually don't need to check if the movement destination is free, because collision detection and resolution can be handled by the engine. When you use rigidbody movement, then the engine will do so automatically and just not move the rigidbody when there is an obstacle in the way. Or if that object has a dynamic rigidbody, it will push it out of the way in a physically correct manner.

But in order to do that, you actually have to use the Rigidbody / Rigidbody2D component for movement. When you use transform.position = ... then you are not moving the object, you are teleporting the object. Which means the engine will be perfectly fine with the object getting teleported through a wall or even into a wall.

If you want to move an object in a physical way, use GetComponent<Rigidbody2D>().MovePosition(newPosition). This will move the object towards the position, and stop when there is another solid collider (with a static or kinematic rigidbody or a rigidbody-less collider with the "static" flag set on the gameObject) in the way. Colliders with dynamic rigidbodies will get pushed out of the way instead, but won't slow the player down.

If you want the player to be able to interact with other dynamic rigidbodies in a more physically realistic way, use AddForce instead of MovePosition to control its movement. Using forces instead of moving also allows you to make the object retain its momentum, which can sometimes result in a better game experience. But in most cases you might want to increase the linear drag of the rigidbody, as it otherwise often feels far too slippery (the default is intended for objects flying through the air, not for objects moving on a solid surface).

Here is a little demo which shows how different ways to implement movement work in Unity and how they affect gameplay.

First, a design question: Why. Why do you need physics? You could simply ask if the TileMap contains a certain tile that is not walkable, for example, and then, when you walk, check your character to see if he walks into that tile. The colliders seem overkill imho.

Or the other way around: why do you have the tilemap? If these were just prefabs with sprites, you could easily edit their colliders, and probably save you a lot of colliders.

From the video I would conclude that you want your character to be able to walk closer to objects and even behind the fence. So the fence collider should be lower and maybe edit your character to have a smaller collider for walking sake, like a small circle at the base where the feet are, so that his entire upper body can overlap what is behind him.

I suspect that none of your tiles really need a rigidbody component. Let the player do all the collision checks - it is not necessary for both game objects to have a rigidbody. They just need both colliders - if that's the way you want to do it anyway.

I have managed to find an answer, though I am still open to any better answers.

By adding a child object to the player, I was able to position it (by initially adding a square sprite renderer with white colour, so I could see it). I positioned this child object in the area I wanted to collide. I changed my collision detection to be based on the position of this child but still moved the parent object as before.

Here is the updated example, where colliderObject is this child object.

Here is a video of the solution in action:

I will keep this answer as unaccepted for now, in case anyone has any better answers.

Not the answer you're looking for? Browse other questions tagged unity 2d collision-detection grid .

4
Why is my collision resolution failing on the corners?
1
Collision between Mesh Plane and 2D Sprite
0
Collision detection with moving tilemap
20
How can I detect the player being crushed in a 2D platformer?
3
How to completely stop the camera from clipping into the ground
1
Monogame - Collision not working and invisible walls