I understand to extract clip planes from the perspective matrix one can follow the methodology laid out by Gribb-Hartman as documented here:

However, I have noted that, given a perspective transformation matrix, such as the one provided by glm::perspective, you will get you planes in the form of the general plane equation ax+by+cz+d in view space.

Yet, as far as I am aware that once the 4D co-ordinates of a vertex, (where w == 1), are multiplied by a perspective matrix, they are considered to be in clip space, prior to their division by 'W' to bring them in to Normalized Device Coordinates form (NDC).

I understand that testing whether to clip a vertex or point in clip space is easy enough, as if the following inequalities are met, the vertex should not be clipped. 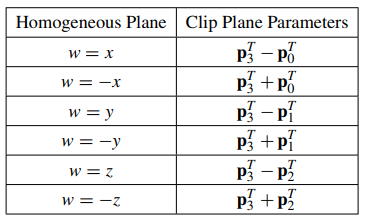 If this is the case, why do we ever need to extract the planes to be in view space?

Additionally if we consider the line P->Q and lets assume:

P is inside the viewing frustum

Q is outside the viewing frustum

we will need to generate a new vertex with point R which resides on the line P->Q but it needs to exist on the intersecting plane.

I am very confused

Thanks for any insight.

Why do we need to extract the planes?

why do we ever need to extract the planes to be in view space?

There are multiple reasons to extract the planes. And, yes frustum culling would be one reason. It usually involves discarding meshes in CPU before sending them to the GPU.

We can use the same approach described in the linked document to extract planes in whatever space we need, it is matter of which matrices we use. And usually we want the planes in world space. But why extract them in the view space in particular? I don't know. But we can!

So why is clip space not just culling space?

Here I'm interpreting this question as if it were asking about the name "clip space".

Why do we cull before sending the data to the GPU?

We cull in CPU because that way we send less data to the GPU. Sometimes too many vertex become the bottle neck and have a real impact on performance. For a good while polygon count was on the top of the list of performance concerns, and still is, depending who you ask. So we will use levels of detail (using meshes with less vertex when they are far away from the camera), and we will do all sort of culling.

What does frustum culling mean anyway?

I assure you that when people complain that a game engine does not do frustum culling, the GPU is still clipping, but the complaint is not about nothing.

By frustum culling we might mean to not send meshes that we can be certain to be outside of view (Or even to discard individual faces depending on the position of the camera, as some games do). Doing this is important for open world games where there is plenty of geometry in every direction.

You would, of course, combine this some form of space partitioning. Due to the fact that discarding an entire partition is better than discarding individual meshes.

For games set in interiors, you can use an hybrid portal based occlusion and frustum culling (where portal means door or window or similar). Which is done by first finding what portals are in the viewing frustum. And then figuring out what rooms they connect to, and find portals in them. Except you are going to clip the viewing frustum to the portal (so you have a smaller - skewed, not centered - viewing frustum that represents the view through the portal), and use that to find if there are any portals in view in the other room. And so on. Of course, for each room you can do frustum culling, not with the original viewing frustum but with the frustum(s) after clipping through the portal(s) that lead to that room.

Also, by frustum culling, if you dig enough - or you are looking at some old documentation - you will find the technique of cutting triangles by adding vertex in the intersection with the planes, so that we only send the pieces that are inside the viewing frustum to the GPU. This was absolutely worth doing back in the day of immediate mode rendering and render lists. I'm not convinced it is worth doing today.

However, here is something similar - from my own experience - that I needed those planes for: to generate meshes based on the viewing frustum (instead of cutting them). In particular, I wanted an "infinite" plane. No, I can't put vertex at infinity and then cut the mesh to the viewing frustum. But I can extract the planes of the viewing frustum, compute where they intersect the plane I want, and that tells me where to put the vertex to represent it. Similarly when I want "infinite" lines, I can follow the same approach. I also needed this to work in orthographic and perspective projections.

Why don't we project meshes to clip space in CPU and do frustum culling that way?

So why is clip space not just culling space?

Here I'm interpreting this question as if it were asking about where to do clipping operations.

The GPU is faster doing that. So, clip polygons in clip space in the GPU, where it is faster.

However, as I was saying, polygon count is important. We want to do something in the CPU that is faster. That something is frustum culling.

Plus, be aware that we might be doing frustum culling by a different frustums (such as I described above when talking about portals). And I also want to mention that not every rendering technique uses meshes (e.g. ray casting/marching).

How can frustum culling in the CPU be faster than clipping in the GPU?

By the way, assuming we are working with a perspective projection: You can test against the viewing line with the dot product (of the viewing direction and the direction from the camera to the point being tested). It is a coarse test, and you need to compute the threshold for the dot product depending on the the vertical and horizontal viewing angle with trigonometry - thankfully viewing angle does not change often. A more refined alternative is to make an horizontal test and a vertical test. And that is another way to define the planes. However, it only works on a - centered, not skewed - perspective projection.

As you can see, we can discard who knows how many vertex in a few checks in CPU.

Not the answer you're looking for? Browse other questions tagged opengl graphics-programming glm .