I’m having a problem trying to fix my 1bit ordered dithering shader.

This shader is going to be perfect to be used but there is some detail that I would like to fix.

First of all, this shader is not just a shader, I'm going to make it for a videogame, so I don't need it to be smaller, with very few characters etc, but useful.
For this reason I used a lot of uniform variables, to let them be like a bridge between the shader and the game.
In this way some parameters could be dynamic and not just static, so that I can animate them or change them by pressing a button.

This below is my final shader for now. I studied a lot of variants by looking at ordered dithering in wikipedia and studying almost all the dithering shaders in shadertoy. None of them are useful because I'm making this game in game maker studio 2 and some ways to write a shader are not supported. So I had to understand very well how it behaves and try to make my own shader

As you can see here I'm using a texture for the bayer matrix, for different reasons

So, I decided to

The shader works to not just have the dithering but to manage the single parameters to change the image dithered. In this way I can have different effects which make the game more dynamic.
Some of these are:

IMPORTANT! v_vColour is important to be multiplied by the final color, to keep let game maker still use his blending feature, game maker studio use 2D sprites but could be used for 3D also, so it manage the sprites like them are made by a triangular 3D plan in an orthographic view, so v_vColour is the vertex color of the plan where there are the sprites, in this way you can blend the sprites with a color by gml. Is very useful to have and I would not leave also if my final render is black and white, the reason is pretty simple, if I use white sprites I can always make them black multiplying black on them, but without using the shader for it, in this way I can use the shader for the whole game canvas, but i can use also some gml to fix here and there.

I got a better shader adding a vignette effect with lots of uniforms to change all parameters dynamically so:

For the vignette I decided to make dynamic every parameter:

At a first moment I had the problem of the dithering size but I recently found how to fix it keeping the texture resolution but giving a third parameter to consider.

ditherSize like every other parameter is dynamic to let me change the dither size in game. At this point the shader is going to be perfect, but in some points the shader is going to cut in half some "pixels" of the bigger bayer matrix texture, with the step function. The final effect would be with a perfect dithering with squares black or white, not cut half.

I should try to leave this cut

This is the artifact that I got 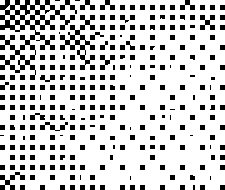 As you can see the texture is applied on top of the surface and rendered in a wrong way.

My dither size works perfectly on the 426x240 resolution canvas but changes when I get the full screen. I found a good dither size of 5.0 at full screen but it still cut some dither pixel

I hope to have been very good explaining this issue because is not an easy task. I hope this could be useful for you guys to understand more about dithering and in this particular case bayer matrix and ordered dithering and I really hope you can help me fixing it to make it perfect.