Why the target variable can't find the object name "Base"?

but target is null when running the game.

this is a screenshot of the hierarhcy the script is attached to the Missile Launcher in the SampleScene and the "Base" is in the Example_01 scene. 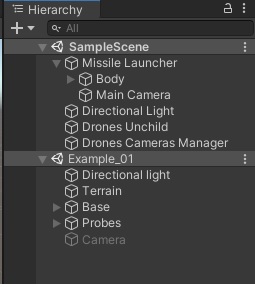 Awake() gets called immediately as soon as the object has spawned/loaded. It's almost like a constructor, in that it will finish before a call to Instantiate() returns the newly spawned object.

That means that anything else that's being spawned in the same/subsequent pass is not necessarily in existence yet.

In this case, it's likely that your first scene loads and calls Awake() on all its objects before the second scene has finished loading, so the object simply doesn't exist yet to be found.

By moving your search to Start(), you delay it until just before the first Update() tick, giving time for the rest of the scene(s) to finish loading so their objects are ready for you to find.

1
Why transform.find() does not need actual object[unity]
0
Click event doesn't trigger when clicking
4
How to make an Assert.IsNull test pass when the value is reported as <null>?
1
Access a Private GameObject in Unity
1
Unity - protect MonoBehaviour-derived classes from instantiating via new in C#
1
I found out how to rotate both Sphere and Cube (1) like a Turret facing a target but why is it so hard?
3
How to completely stop the camera from clipping into the ground
0
Varibles Initialized in Awake are null in other script's Start
0
Why the transform is not looking at the target?