I have written some code that creates a very nice uniform angular acceleration for an object moving around a circle. It effectively uses linear interpolation but ramps the interpolant such that the change is non-linear, hence the acceleration. The code is:

It allows me to accelerate from a start speed to an end speed, over a defined angular distance within a specific time. Great!

The problem is that I cannot figure out how to reverse this code to create the opposite effect, i.e. a deceleration. I have tried reversing the logic but it does not work, as counting downwards breaks the maths. Perhaps I am being obtuse but can anyone help here?

I would really like to keep my acceleration code the same; I suspect there is a simple tweak that I am missing. Any help is greatly appreciated!

(Instead of using that trigonometry logic of yours I am just rotating the object itself, but if you feed currentAngle into your code then it should work as expected)

How I drew the rotation curve in the inspector: 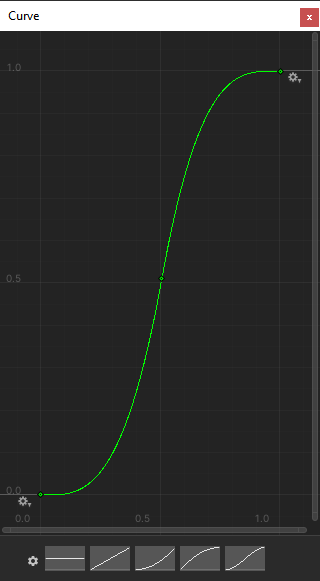 How it looks when I press play:

Not the answer you're looking for? Browse other questions tagged unity physics lerp .

0
How to convert linear lerp to non-linear using animation curve?
0
How can I add ease in out for object rotation?