I am working on a 2D shmup that requires rendering thousands of animated bullets and animated medals on screen at the same time.

I use a standard pooling method to activate and deactivate these objects when they are needed, rather than make instantiation calls during gameplay.

When I first set up my objects using SpriteRenderer and Animator, I found that Unity was unable to render everything performantly, and the culprit according to the profiler was tons of calls to animation system. Using native SpriteRenderer and Animator just doesn't seem to work when you're trying to render thousands of sprites at once, even if you're using a pooling system and have no physics on the objects whatsoever.

Because of this, I switched to using a custom system to draw my bullets and medals. The system works as follows.

Each bullet (and medal, for that matter) is a bare bones object w/ nothing more than a position, a vel, and a reference to an instance of a custom class called SpriteSheetAnimationData. This class stores frameCount, currentFrame, frameTimer, frameExtent, Vector4 uv, and Matrix4x4 matrix. When an instance of the bullet is needed, it is activated from my bullet pool and its animation data is reset.

I also have a custom object called RenderingManager which contains references to the following.

Each frame, I iterate through active bullets in my pool, update their positions based on their vel, do simple collision check using squared distance, and update the bullet's SpriteSheetAnimationData instance based on the bullet's position and how much time has elapsed since the previous frame.

Then, in my RenderingManager, I use the single bulletMaterial and bulletQuad to draw all the bullets with a single call of DrawMeshInstanced(). It looks something like the following (albeit for medals, not bullets):

This works like an absolute charm! It allows me to draw thousands of animated bullets and medals on screen at the same time with no slowdown. 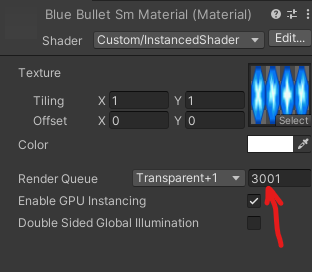 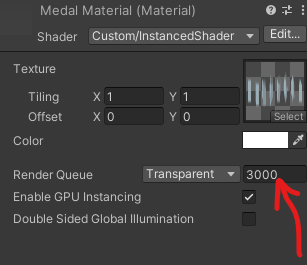 The problem I now face is that I have some normal GameObjects which I need to render in between my bullets and medals. For example, Pickup which uses SpriteRenderer and Animator, and SpecialText which uses TextMeshPro.

Because DrawMeshInstanced() is only able to draw into the Default Sorting Layer, and I have these other objects on custom Sorting Layers, they always appear behind the medals and bullets, rather than in between them like I need.

I am more than willing to simply set all my stuff to the Default Layer if it could help, but I still wouldn't know how to get them to appear between the bullets and the medals, since the latter use the special rendering system.

Any advice on how to solve this issue and render my normal objects between the two objects I have using the custom rendering system, which is pinned to Default Layer?

2
How can I actually understand Instanced Geometry Rendering - so that I can implement it the way I need it
1
Creating animation by script with animation assets
1
Way to deserialized or load last save state scene with GameObject and other classes instead of storing normal fields via binary format?
1
Unity particles rendering on top of camera space UI
1
Throttling or adding delays between OnTriggerEnter2D calls
1
Entity component system: how and where store pointers to system resources or third-party lib's objects?
0
Effective solution for showing the outline of the player sprite when behind objects or tiles that are meant to be in foreground