How can I make a tracing game mechanic more engaging? 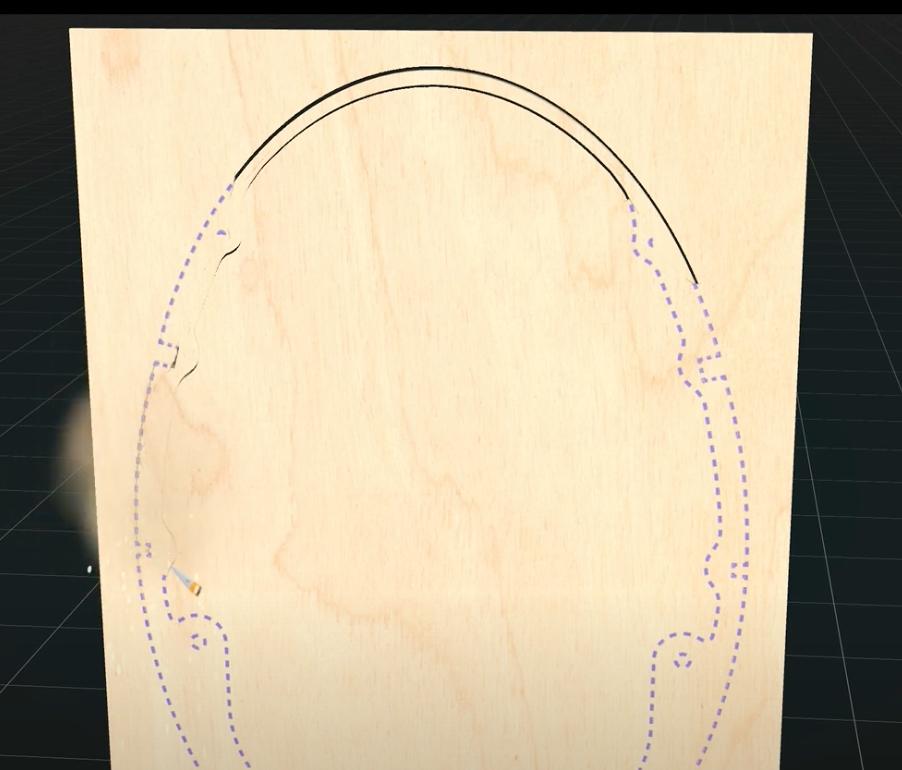 It works, and it is kind of satisfying, but ultimately the player is simply mindlessly tracing a pattern. There could be dozens of parts in the game like this, but as it stands no one would want to do this twice, let alone multiple times. I'm looking for ideas on how to make this activity more challenging or otherwise engaging, while still resulting in a correctly shaped part when finished.

My family is of carpenters. So, that is my bias. However, if you want challenge, hear me out.

The first thing that bugs me is that you start cutting in the middle of the board. You would want to drill a hole first. Which brings me to a few ideas:

The basic tools would be a saw and a drill. You may add a (woodworking) chisel as beginner tool. And you can add variations of the saw and drill.

If we sort cutting tools by how tight curves they can make, we have: table saw, handsaw, hacksaw, and jigsaw coping saw. By the way, that is also from fast cutting to slow cutting. And from more lost material (i.e. a wider cut line) to less.

Upgrades for the drill line are also possible: Bit brace to hand drill (wheel brace), to electric hand drill (by the way, have a look at the drill bits for door nob holes).

But in general you have things that cut (which need to begin on an edge), things that make round holes, and the chisel would make narrow rectangular holes.

So, the player have some assortment of tools. How do we make them work so the player can use them however they want?

Well, polygons. You start with a rectangular board. Represent that as a 2D polygon for our operations. And from a 2D polygon you can make a mesh by triangulating it, making two offset copies in 3D, and then adding a triangle strip for the edge. And while working with 2D polygons, we can do polygon subtraction to make the cuts and (approximately round) holes.

Note: in real life practice there is always some lost material, regardless of tool, which becomes shavings - no mentioned tool would make shavings - and sawdust (which reminds me: particle effects). Thus I suggest subtracted polygons.

Now that the player have tools, and can use them however they want… You need to score them!

First of all, the goal is to cut the piece, and the piece would be a target polygon. This is my suggestion: expand the target polygon by some margin, then subtract it with whatever is left of the board. If there is something left, the player is not done. You can add score as the remaining area decreases.

And there you go: you have challenge, with a failing condition and a scoring system. Perhaps there would be a way to replay to try to get a better score. And you have one possible avenue for rewards in unlocking tools.

As suggested in comments, when the piece is cut in two, you could pick the bigger one, and don't fail if the smaller one small enough. This is something that would require a lot of testing to get right. How small is small is small enough? Would there be sensible areas (some parts of the piece that need to engage other pieces)? How do you communicate that to the player?

If you think you can make it work, feel free to go for it. However, if the goal is to be less punishing, I'm going to suggest an alternative: have an undo option. That would be easier to communicate and to test.

Simplest implementation will be an stack of recent states, so you push a state every cut, and you pop on undo.

Perhaps the player can only undo failing moves. Which is what I would go with if the goal is to be less punishing. However, perhaps the player can undo indefinitely. Or perhaps it works like a consumable. You could make undo cost money. For example, pretend it just means the character took another board and did fast forward every move. In fact, if there is in-game time, it could cost that too. Or you could make it an abstract consumable the player buys… But know that players will stockpile that, and it does not necessarily make for fun mechanic. On that note, "watch this ad to undo" isn't a fun mechanic either.

Almost this exact mechanic is in the Harry Potter and the Philosopher's Stone PC game. I found it very frustrating and quite difficult to make the mouse do what I wanted.

My suggestion is, make this part of the game 3D. Zoom the camera in and sit it on top of the powered Jigsaw, pointing half forwards, half down. Then get the player to use the keyboard arrow keys, or tilt of the phone, to drive the jigsaw around the pattern like a racecar around a track.

The first thing you need is to devise a way that the player can fail making a good part. Without that there's virtually no way to make this interesting. The player needs more direct control on the cutting and perhaps the measuring too.

If you want a gamey way to add interest, make it time-bound. I don't know about others, but a score isn't really a good motivator for me.

Also, make it persistent. In real life you wouldn't have infinite boards to cut to get your aircraft pieces. You could even really have a single chance to cut every piece correctly.

And when I said to add a failure condition, that doesn't necessarily mean to immediately force the player to try again cutting the same piece. You can have a fail-state with or without consequences (as in the example of limited wood). One cool way that could work is if at the end of the game, you try to actually make the plane fly and the pieces used in the plane were the actual shape cut by the player. If a piece doesn't have the right shape, the plane might not fly straight or might just crumble after assembly.

The Vita game Uncharted Golden Abyss has a charcoal rubbing minigame, where the player has to rub their thumb across the screen to trace a pattern. The drawings are collectibles that are used to complete jigsaw puzzles. See 1:15 in this video.

Playing your demo kind of feels like the charcoal rubbing mechanic. In Uncharted's case, the mechanic is kind of just a gimmicky way to use the Vita touchscreen, but also makes the collectathon a little more engaging. You might want to consider making your version simpler, maybe have it be one step instead of two (cut, instead of trace + cut), require less precision, etc. That wouldn't be as interesting as the suggestion from Theraot, but it would help with the problem of users not wanting to do it after the first few times.

One idea I had for making it more interesting would be to have the knife leave scratches on the wood if you don't follow the line. That way, if you're lazy, your final airplane will be all ugly and scratched up. If you don't care about that, then you can just quickly move your mouse/finger across the screen to get past that section quickly.

Give a score for the performance (accuracy, or maybe maybe speed, maybe both) after a part has been cut out. A high score means a reward, a higher score means a better reward (or more of the same award).

The award would be a trained monkey, which will help you cut out additional parts. Score bad, and you have to work on your own on all the parts (until the accumulated score get large enough to award a monkey). Score high, and a monkey will work in parallel with you on parts. Continuing to cut pieces, you continue to accumulate on your score (the monkey will cut with the same performance as you, so having a monkey will double your increase for the next parts).

Eventually, you'll have an army of monkeys which do most of the work.

They will also poop on the shop floor and the smell of singed monkey hair will be awful when they get too close to the laser cutter. Oh, well, if the wood shop already has laser cutters...ditch the monkey idea and award CNC laser cutters. The monkey will be more charming, though. You could give the score in bananas. More bananas, more monkeys, more banana peel and other...."byproducts" on the shop floor.

Not the answer you're looking for? Browse other questions tagged game-mechanics or ask your own question.

6
What game mechanic can I use to show that the player character is bored?
2
Hill-jumping game mechanic like Tiny Wings
1
How can I make different levels in a game?
0
Game mechanic player following path looks very roughly
8
What is a game mechanic?
1
Is it feasible to create a blockchain to use as a market place game mechanic without extreme inflation?
0
How to implement a mechanic of entering a town