I'm wondering how to create art like this (the map, not the characters), is this 2D or 3D? 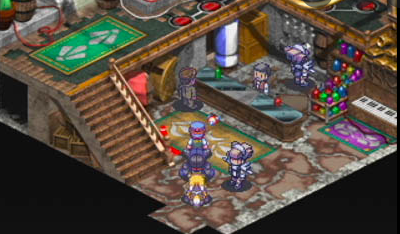 I believe - judging by video footage of the game, and the platform the game was released on - that the background is pre-rendered 3D made into square tiles.

To replicate that, you would create the scenario in 3D with textures. Then render it form a isometric perspective (you want both the color and depth), then chop that into squares, and then use those squares as tiles in the game.

Why do you want depth? In game you can position and render the character in 3D space with depth test (so they can walk behind some parts of the background).

Why do you want to chop it into tiles? So you don't have to load one big texture for the map. Instead you can load the tiles as they are needed.

However, the 3D scene would have very simple geometry. Since they and you knew the viewing angle, doing some hand painted parts instead of using 3D geometry is possible. Round objects, and objects not accesible to the player are good candidates.

In the provided screenshot we see some round objects that probably aren't modeled, but hand drawn. So they don't add to the polygon count. That would have been important to keep pre-render times low, and iterate fast.

There is another reason to keep the pre-render model simple: they can use it to generate navigation meshes or collision meshes. Which is also a reason to make it 3D, instead of hand painting everything, which would have allowed for a more organic look.

These are all decisions informed by hardware limitations. Limitations which you would not have today. However, if you are going for an authentic look, you can let those limitation inform your creativity.

Not the answer you're looking for? Browse other questions tagged 2d 3d sprites art .

17
How are "2.5D" art assets created?
25
How do I teach my artist to do art for games?
2
How do I simulate a crowd in the stadium stands?
1
How to make minecraft like world round?
0
"High" Quality Pixel Art Games (varying the scale factor)
2
2D isometric pixel art technique
1
Editing Pixel Art, Copyright and "The Ship of Theseus" Problem