After every Unity update I have a lot of problem with missing assemblies in Visual Studio Code.

But after some messing around, somehow it always becomes fixed. I updated Unity again and now after wasting hours I decided to do it the right way and find out the source of the problem.

As it turns out the problem is simply that the .sln generated when the external editor is VS Code is just simply missing a lot of assemblies: (and its icon is VS10 instead of VS15)

If I switch the external editor to VS Studio and click Regenerate Project Files, the .sln is now full of assemblies. (if I would just switch to it, it wouldn't touch the sln)

So now I switch back to VS Code, voilá it works because the assemblies are in the .sln.

BUT for some reason if I restart Unity the .sln is always regenarated because possibly it detects that it has been generated by VS Studio while the current editor is VS Code.

So it's missing the assemblies every time I restart Unity.

Now at least I know that every time I launch Unity,

But before the update it was fine. It's always like this and then somehow it becomes fixed automatically at startups as well.

What's causing this, how could I fix it? Thanks in advance!

Looking at the file structure of this project, it seems that .csproj files are enabled to be generated for many packages.

So they suggested the following fix which indeed solved it:

And for some reason I can still access my git packages in my IDE so then I don't know what "Git packages" checkbox is for. 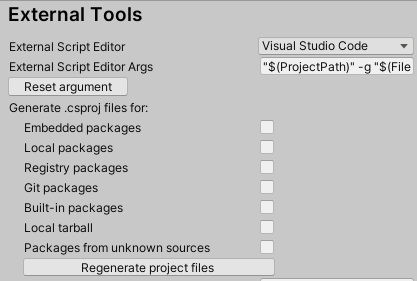 3
Synchronization problem with Visual Studio 2017 and Unity 2017.1.1f
7
No project in visual studio using unity created
1
Upgrade to Unity 2018.2.2f1 resulting in missing file errors from Visual Studio
5
System.Net.Http.dll and Unity 2018.2.1, 2.2, 2.3 are conflicting, assembly reference keeps being deleted in VS 2017, any suggestions?
5
How can I launch Visual Studio via a double-click on a C# script in Unity?
0
Visual Studio Code Unity AutoComplete still not working
0
UE4 C++ - Add generated source code folders to Visual Studio solution?
1
How can I change the root namespace for scripts in Unity?