I am playing around with a VR game where the player can fire a hand gun. When the magazine is empty they can press a button on the controller to eject the magazine from the gun. As its VR, I would like to have the player be able to pick up the magazine again, if they need to.

Currently when the eject button is pressed, the rigidbody of the magazine is enabled and it falls from the gun.

My question : The player can hold the grip side pointing up and the magazine will drop through the gun or hold the gun sideways and the same will happen.

If the player hold the gun in any of these orientations, the magazine needs be released but stay in the grip and only slide out as the gun is turned so that gravity pulls it.

My first instinct was to use code to animate the magazine and only enable the rigidbody when it leaves the gun. Another way to use 5 box colliders to emulate the walls of the grip and that way contain the movement.

I was just wondering if there was a better way to do this.

A Configurable Joint seems what you're looking for, as pointed out by DMGregory in this previous question.

I tried to implement a sliding magazine in a gun using the following setup:

I made the following assumptions to make this system work:

I managed to configure the Joint as follows: 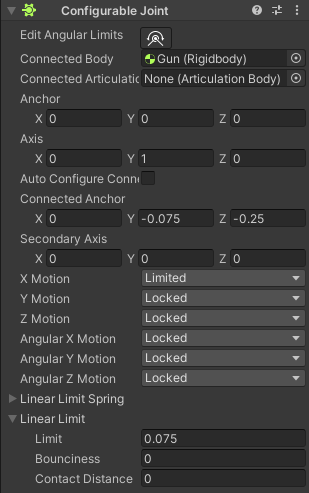 Actual values depend on your actual Magazine dimensions. The main idea is to enable movement along the ejection direction only. By assigning a Connected Body, you can work in local coordinates.

I defined the Connected Anchor (the centre of the "track" the magazine moves along before being ejected) at a position such that, given an appropriate Linear Limit distance (in my case it's half the magazine's height), one end is the starting position of the magazine (same position as when inserted) and the other end is when the magazines starts falling:

Via script, when the magazine reached the bottom end, you can disable/remove the Joint to let the magazine free.

Not the answer you're looking for? Browse other questions tagged physics rigidbody collider or ask your own question.

1
How do I configure a joint for a sliding door in Unity?

2
Stuck on walls or sliding on top dilemma
0
Rigidbody or Character Controller for a momentum based sidescrolling shooter/platformer?
3
How to disable gravity for a RigidBody moving on a slope?
1
Character on platform move slowly
0
Unity3d Move player with UI buttons
2
Bizarre Physics FixedUpdate Lag spikes
2
When setting Rigidbody.isKinematic true collider won't work anymore
0
How to use AddForce on a capsule?
1
Problems with gravity and box colliders in Unity 3D
0
Character falls through the Platform Effector 2D in Unity. How can I fix it?