Calculating the rotational force of a 2D sprite

I am wondering if someone has an elegant way of calculating the following scenario.

I have an object of (n) number of squares, random shapes, but we will pretend they are all rectangles.

We are dealing with no gravity, so consider the object in space, from a top down perspective. I am applying a force to the object at a specific square (as illustrated below). 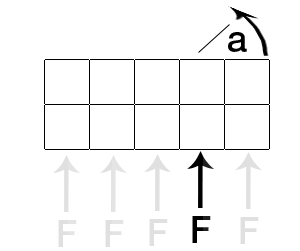 You're trying to calculate the Torque. Torque depends on the applied force F, the point of application, and the center of mass of the object.

1) Center of Mass. Define the center of mass of the object.

2) Point of Application: Define the point at which the force acts on.

3) Moment Arm: The distance between the two points defined above.

5) Torque: The perpendicular component of the force multiplied by the length of the moment arm.

To get from Torque to angular velocity:

1) Moment of Inertia: A definition of how much rotational inertia a given object has. For example, it takes more torque to rotate a long bar than a sphere of the same mass. If you aren't concerned about realism, you can pretend the moment of inertia is relative to the mass, or you could ignore the shape and mass of the object entirely.

3) Angular Velocity: The Angular velocity will keep increasing as long as torque is being applied. So a formula will roughly be "Angular Velocity at time T is the cumulative sum of Angular acceleration up until T." This is expressed in pseudocode as

if forces are not too strong it's much more easier to simulate rotation using multiple dots and springs connecting them. in that case you just assume your shape in consist of multiple dots connected by springs. each dot represent mass and every thing else in shape has mass equal to zero. 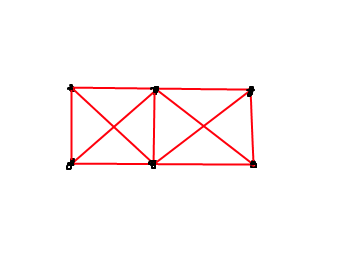 in above picture black point represent masses and red line represent springs. then to apply the force you just have to apply it to the nearest dot and you'll see your object will rotate just as you like. to make your shape look like a solid structure it's better to define springs with a high damping value and high k value.

Not the answer you're looking for? Browse other questions tagged 2d rotation physics vector .

3
Physics system imploding under force
1
Strange behavior of RigidBody with gravity and impulse applied
1
How to move around a player in a curved tunnel?
10
Falling Blocks and complex shapes
2
Calculating/Predicting a way
3
2D Physics: What happens with torque when center of mass changes?
3
Game Physics: Calculating a collision response using the Separating Axis Theorem?