How do I find a point given an angle and distance to it?

I'm working on a school project creating a tank team in the programming game Robocode. (It's a tank battle game with self-programmed bots, in Java).

I'm programming a scout bot that scans, finds enemies and reports them to the commander bot. I only have the distance and angle to the scanned enemy bot. How can I find its X,Y-position using only these known variables? 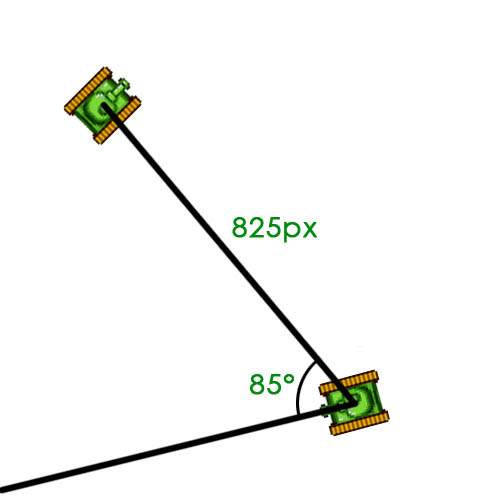 Most libraries use radians not degrees, so:

If you want the coordinates in the world reference frame, you will need to get the direction of the Tank, subt add the centre Tanks origin to the result:

I think this will be enough if you don't use scale.

I have just made up an example in C#/XNA and got it to work perfectly.

Here is the current function

Note that angle 0 means that the CurPos Tank Sprite is pointing right, In the example I made, I simple used the Left and Right arrow keys to + or - the current angle, and when drawing would simple use...

Obviously this is in C#, but i'm sure it wouldn't be too hard to convert to Java, seeing as both languages are quite similar anyway.

Not the answer you're looking for? Browse other questions tagged java mathematics vector angles or ask your own question.

14
Get position of point on circumference of circle, given an angle?

8
Find the closest point along a rectangle, given an another point and direction
11
How do I find a point on a line?
14
Get angle in radians given a point on a circle
4
Given an angle for an arrow, how do I find its X and Y velocities?
6
How to find point on a circle that's opposite another point?
1
Find Coordinates of Exit Point
1
Find hexes on a hex grid given an angle
0
How to find 1/3 and 2/3 of the distance between two given points?
2
Find projectile initial velocity, and air time, given projectile elevation, distance, angle