I have the following pieces of code:

This spawns cubes all around the terrain at position 0 on the Y-axis. But I want it to position the cubes at a height depending on the terrain elevation.

I'm not sure if I need another raycast, and how to use it for the cubes before positioning them.

I tried this but it's still not working:

You don't really need the Terrain.SampleHeight() function, since hit.point already contains the information (i.e. the position on the Terrain) you're looking for.

I used TerrainCollider instead of MeshCollider because I assumed you were working with Terrains, but the same criteria apply to Mesh colliders as well, provided some minor code edits.

The previous function places cubes on the terrain without applying an offset to hit.point, and this results in cubes penetrating the Terrain after positioning: 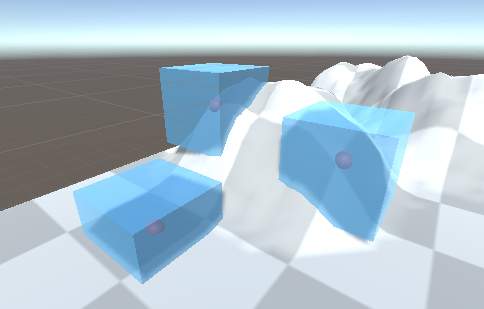 You can solve this new problem in different ways, but the main idea is moving the cube towards a certain direction for a certain distance so that it touches the Terrain without intersecting it.

When a cube is placed, its bottom half is "inside" the Terrain but its top half is actually visible. Then, we can move it upwards for half its height with respect to the hit.point. To do so, just add an offset value when setting the cube.transform.position:

We multiply 0.5 to a vector to define a distance along a given direction in space. Rather than hard-coding values, you can also compute object heights programmatically by using Mesh.bounds and then Vector3.Scale() to account for scaling as well.

This small tweak improves the final result, although polygons still penetrate each other when slopes are steep: 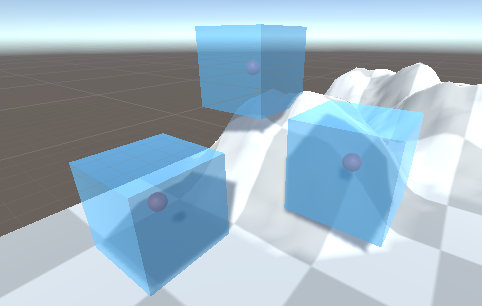 You could even use hit.normal in place of Vector3.up and apply the offset along a direction perpendicular to the hit surface. Rotating the cubes will look nice as well (I don't know if this is what you're looking for though): 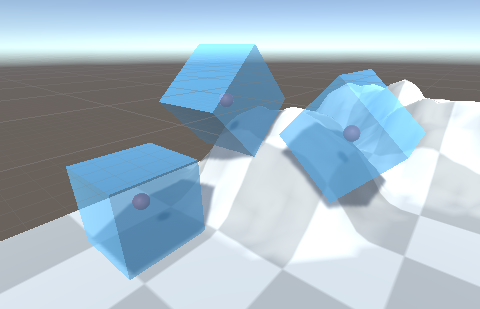 Instead of positioning the cubes and adjust their position, you may use a different approach:

This way, you are "dropping" a cube from atop of the Terrain and casting a geometric proxy downwards until a collision occurs. The cast results in a position a cube can be placed in without intersecting the Terrain:

SampleHeight method returns a value relative to the terrain space, more details can be found here

1
Unity scaling instantiated GameObject at Start() doesn't "keep"
5
Voxel (Marching Cubes) Terrain Creation / Terrain Editing
1
Using 2D Heightmap Data to generate terrain with the Marching Cubes Algorithm
0
How can i keep the spawned cubes to be inside the given area?
1
How to prevent cube intersecting with other objects when moved around with mouse?
3
How to completely stop the camera from clipping into the ground
0
Help needed in getting the correct hit position a raycast hits a sphere in Unity
0
Why when I'm changing the terrain position it's not creating the cubes on the terrain?