I'm currently working on a generated(Perlin Noise) 2D Cave System with Unity.
The Caves currently look like this: 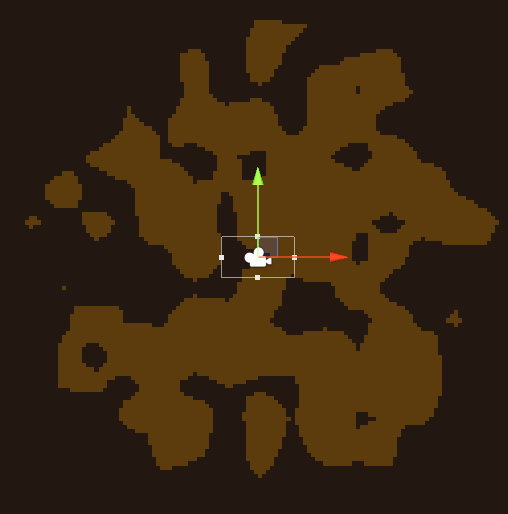 What I want to do is spawn the Player (and other stuff) in the big Part of the Cave and not the small ones, so I wanted to have some sort of List of all the Tile(positions) of the Big Room.

I thought about a Pathfinding algorithm for finding like the two furthest away points and determine the distance, but I had no clue how to find those starting points.

To start with, we need to break down what is meant by room or cave. With respect to the 2D array in the problem description, a room is a collection of elements that are 'connected'. For any given starting point, we can identify all the elements of a connected region using a flood fill algorithm.

The flood fill algorithm presented below works as follows:

When the work queue is empty, all of the elements that are reachable from the starting point will have been visited and tagged. Because the problem description requests a list of all the element locations, whenever an element is tagged, it will also be added to a list.

Flood fill alone isn't quite enough to solve the problem though. We still need a way to find the starting point of the largest room. Since we don't necessarily know where the largest room is, we'll need to iterate over the 2D array and look for it. If we encounter an element isn't open or has already been tagged, we can skip over it. If we encounter an open element that hasn't previously been identified as belonging to a region, we flood fill starting at that location.

There are a couple of options regarding what to do each time the flood fill finishes with a region:

The second option requires a bit more memory, but also provides some extra benefits that might be useful when dealing with procedurally generated caves. Also, after seeing the solution for the second, it's pretty trivial to trim it back down it the first option. Since the second option provides more flexibility and isn't significantly more complex, it's the solution we will examine.

The class above can be used a couple of different ways. The simplest to pass a rectangular int[,] to the static method & get back a list of coords as described in the original problem statement:

For any given x,y location on the map, we can immediately see which room (if any) it belongs to by checking regionID[x,y]. Assuming there's a room there (that is to say regionID[x,y] >= 0) we can then immediately get all of the coords for that room by checking regionCoords[n] (where n is the ID of the room. If desired, these features can help us use the class in other ways. For instance, we could find rooms that are below a certain threshold & fill them. Or include some methods for connecting separate rooms with tunnels.

The flood fill algorithm used here is the four-way stack/queue based non-recursive implementation. It has the advantage of being relatively easy to understand and it has been optimized to check elements before committing them to the queue. It's likely to be fine for most cases, but if profiling the application reveals a problematic bottle in the flood fill code, there are some known optimizations that may help. For instance, it could be optimized further to take advantage of span filling.

Not the answer you're looking for? Browse other questions tagged unity 2d procedural-generation path-finding perlin-noise .

4
Is there an existing algorithm to find suitable locations to place a town on a heightmap?

5
C# XNA: Effecient mesh building algorithm for voxel based terrain ("top" outside layer only, non-destructible)
1
Random terrain generation with caves
10
How to remove floating terrain when generated with 3D Perlin Noise?
2
Infinite detail inside Perlin noise procedural mapping
14
Cave generation with Perlin worms
21
A Simple Method To Create Island Map Mask
6
How to flatten out terrain and make better caves with Perlin noise
3
How to zoom randomly generated maps?
4
Adding terrain features to a perlin noise heightmap
3
How can you use Fractals to perturb an image?