I'm currently working on a raycaster in construct 2.

The FOV is 90 degrees with a screen resolution of 199 x 174. I used this tutorial when it comes to the floor raycasting.

The floors seem to render properly seam-wise, if that makes sense, but the textures themselves (for each square of the floor if you will) appears distorted in a circular motion. I think this happens when it comes to the part of displaying the correct part of the texture.

with alpha being the angle of the ray cast relative to the player (I believe, correct me if I'm wrong, I'm not 100% sure if alpha is actually the ray angle), and d being the distance of the floor point. I believe this is where I have a problem when it comes to determining the part of the texture to display.

How mine works is that the floor itself is a 32 x 32 tilemap with each tile being 1 pixel, having a range of 1024 tiles. I obtain the floor point X and floor point Y, they are modded to 32 since that is the texture width and multiplied to each other, so the tile it picks can be a range of 1024.

The formula below is used to determine the pixel (tile for the tilemap) for each floor point.

Here's what the original texture is supposed to be displayed as 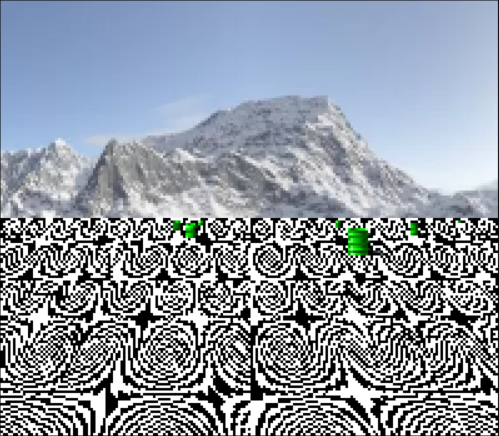 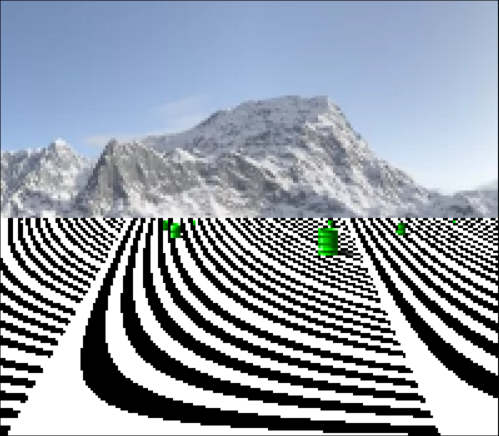 Is modding the X and Y points to 32 what may be causing the problem? I'm not sure what math is incorrect here unless I did get the "alpha" variable from the tutorial confused with something else.