I'm working on a project in wich as you can see in V1 it's doing a lot of drawcalls, 3 per instance of MyRenderer actually,

in the first place I would like your opinion on this pipeline, if I'd be rendering only a single instance of MyRender, as I need to apply different effects (in purple), could it have been more straightforward ? 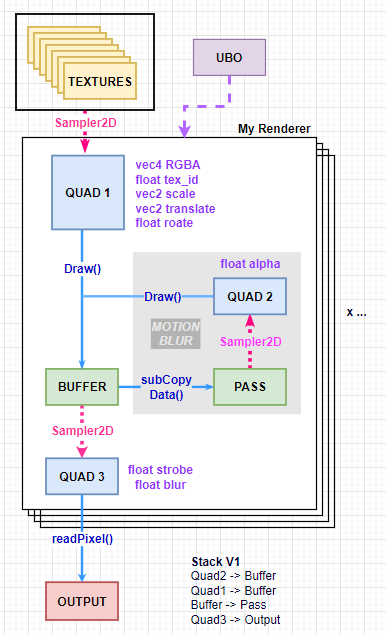 Now I'm working on a V2, that has several subsidiary questions 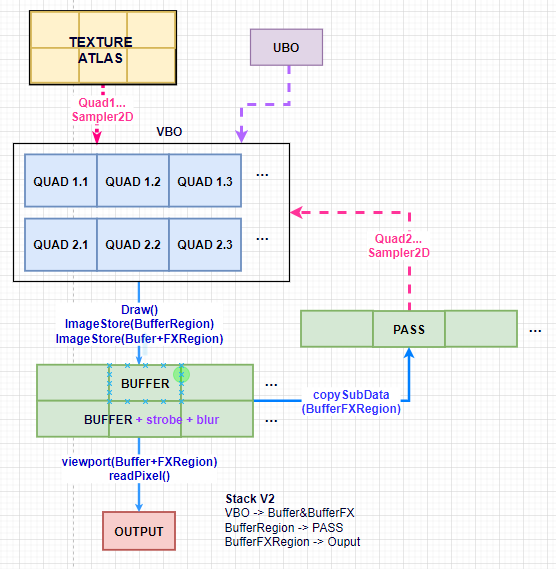 Finaly as you hopefully understood, my whole rendering is mostly a cloner for MyRenderer (with different attributes per instance), would a compute shader be even faster at rendering this ?

I realise now I could have made the diagrams horizontaly, would have been easier to read. Sorry for that !

Hope you understood my questions.

13
How do multipass shaders work in OpenGL?
6
An odd performance problem rendering a simple scene (less than 14k vertices) in OpenGL using two vbos with LWJGL
1
Batching elements
7
What exactly are tool pipelines in the game industry?
0
Vulkan am I creating too many graphics pipelines?
0
Using Fragment Color to store individual bits (GLSL) may introduce issues if OpenGL does any evaluation of the floats before writing them to memory
9
How do I implement flat shading in GLSL?
4
GLSL: How can I optimize this lighting (fragment) shader? Basic 2D game, 30+ light sources cause significant frame loss