How can I create a Minecraft: Bedrock Edition add-on?

I would like to create a custom add-on for Minecraft: Bedrock Edition, but I'm not understanding everything involved with getting started. After reading a few tutorials, I have some understanding of what to do, but there is nothing that wholly gives an up-to-date complete process of how to do so.

How can I create a custom add-on for Minecraft: Bedrock Edition?

Note that I've decided to post this question/answer because of the issues described above. I thought it would help others avoid doing all the research I had to go through.

After reading this answer through and through, you should be able to effectively answer the following questions:

Creating add-ons for Minecraft: Bedrock Edition (henceforth referred to as simply BE) is a relatively straightforward process that, more often than not, requires little to no knowledge of programming. Getting started, you'll need to have an understanding of some basic terminology:

The only tools required for creating an add-on for BE are text editors. Some of the most popular OS agnostic text editors are:

Alternatively, here is an article reviewing a list of 10 text editors that are OS agnostic.

Once you've chosen and installed the text editor of your choice, the first thing you'll want to do is download the vanilla packs. The vanilla packs are going to be a point of reference for anything and everything (excluding scripts) that you may want to accomplish with your custom add-on. It is also recommended that you watch the official introduction to add-ons video.

Once you've downloaded the vanilla packs, feel free to explore their contents and get familiar with the structure: 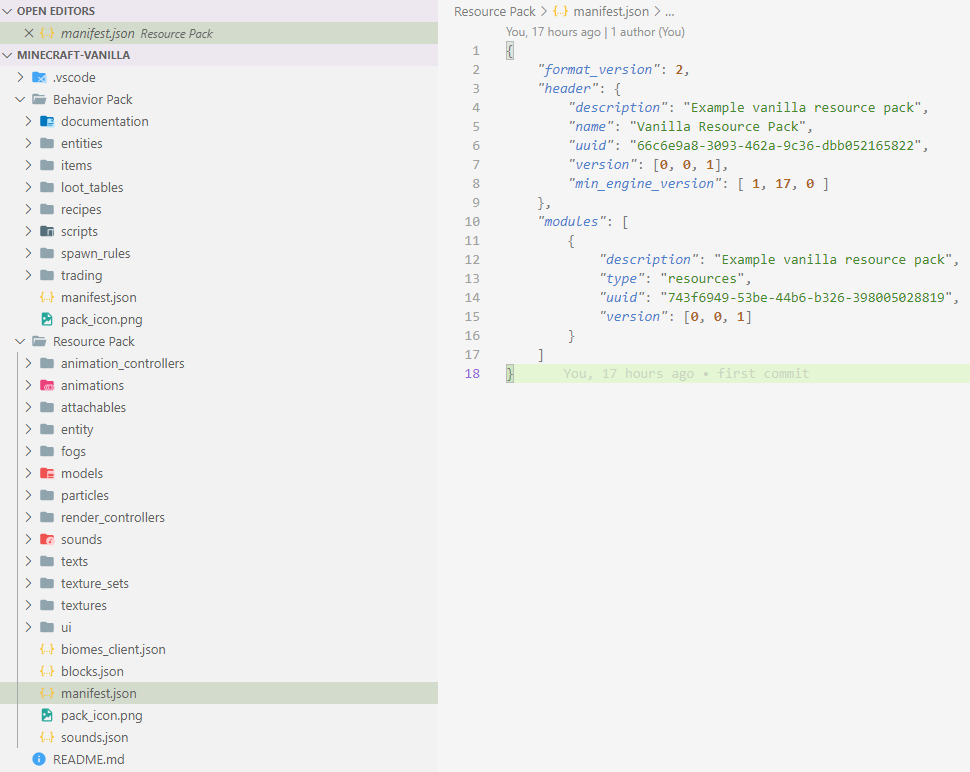 Note: I'm using Visual Studio Code in the screenshot above, but you can browse the folder structure in the file explorer or text editor of your choosing.

Now that you've familiarized yourself with the content structure of the vanilla packs, you're ready to start getting your feet wet by creating your very first add-on. The basic requirements of an add-on are:

You're probably wondering, "is that it?!", well, yeah, it is. Your add-on doesn't actually require a behavior pack and a resource pack. In-fact, only one or the other is required, though both can be included. For the purposes of this answer, the resulting add-on will include both.

To get started, create a folder with the name of your add-on (I called mine Hello Minecraft) and then two folders within that one called Behavior Pack and Resource Pack respectively (henceforth referred to jointly as the pack folders). Within the newly created pack folders, create a file named manifest with a file extension of .json. The resulting stucture should look like this: 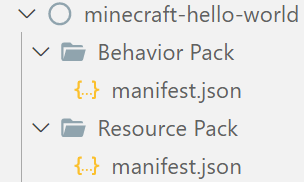 The manifest file is different for behavior packs and resource packs. However, you can grab a sample of both from the vanilla packs to populate the files you just created. Next, you'll need to generate four UUIDs two for each pack. Both packs have a header UUID and a module UUID:

The manifest file has an additional field available labeled dependencies which you'll see in the vanilla behavior pack manifest:

Once you've set your UUIDs, you can then bundle your add-on and import it into Minecraft! To do this, you can store the folders relevant to your add-on (in this case the pack folders) in a single archive file (commonly referred to as .zip files, but this can vary based on OS). After you've placed your add-on contents into an archive file, you can change the file's extension to .mcaddon which will allow you to open the add-on with Minecraft. Importing is as simple as opening the file with Minecraft, from there the process is automated.

Once imported, you should see your packs in Minecraft:

Now that you've created your first custom add-on for Minecraft: Bedrock Edition, you may be curious as to what documentation is available to you. Fortunately, the vanilla packs include some basic, but official documentation within the behavior pack: 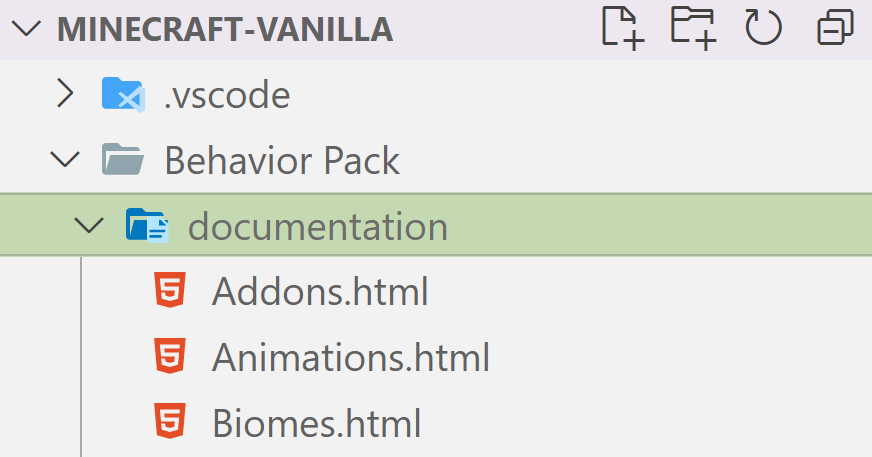 In addition to this, there are online resources (such as Bedrock.dev) that add styling to the aforementioned documentation, making it easier to follow, along with official resources from Microsoft. Also, the fandom wiki is a great resource to utilize when trying to find data values and really detailed information about Minecraft in general.

Note: The add-on created for this answer is available on GitHub for those interested in reviewing the complete package.