I have a rather rudimentary layer set up:

It appears it is only "partially" following the rule that "higher layers take priority." The lower and upper body work fine, as intended, where upper body overwrites. But the Standing Up layer should be overwriting both Lower Body and Upper Body, but it isn't. It's being ignored altogether.

Any ideas why this basic set up is having such difficulties? I haven't even gotten to the part of playing with the weights in script yet to make the Standing Up layer not override Lower Body and Upper Body once the character is upright...

Turns out it was a stupid mistake!

Don't forget to set the animation rig type to humanoid! 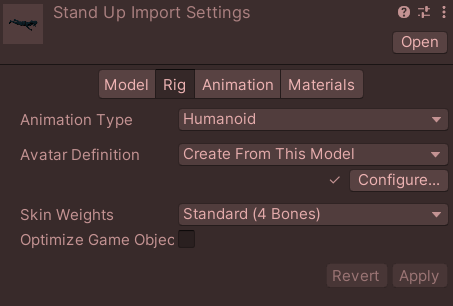 Not the answer you're looking for? Browse other questions tagged unity animation skeletal-animation mecanim animator .

0
Unity 5.2 --- Animator window / tab
1
Multiple Sprite animation layers overlayed in Unity Animator
0
Iterating through all animator layers in Unity Mecanim
0
Why does Avatar Mask not work as expected?
0
Unity Animator not animating player, but following transitions perfectly in Animator Window
0
How can I disable an Animator from the Animation in Unity?