Why is this GL_TRIANGLE fan texturing incorrectly?

I am constructing some terrain for a 3D game (in C) as a 2D grid of tiles, the corners of which have height into the 3rd dimension. In the middle of each tile is another vertex, the height of which is the average of the heights of the tile corners around it. This means that, for each tile, there are 4 triangles to be drawn, with every triangle sharing a 1 point in the middle and 2 on the corners of the tile. I figured that a GL_TRIANGLE_FAN would be appropriate for this task.

In the code below, struct vbo_vert is a struct containing a vec3 and an unsigned char, in that order. Each triangle fan consists of 6 vertices (one for the middle, one for each of the corners, and another back on top of the first corner to close the square), and each vertex is sent to the GPU with a number from 0 to 4 in the byte member of the struct so that the vertex shader can determine the texturing. c_vec is an array of vec3 positions of the tile corners, and t_vec is a similar array for the positions of those central vertices.

After this I open a texture. I fairly sure that the image-reading and texture-writing code is sound because I use practically the same code to texture models made of GL_TRIANGLES elsewhere and it works great. Then I send tri_fan to the GPU, and I know that the VAO and Array Pointers are good because I can draw the terrain as a wireframe and it looks fine. That just leaves the shader program.

I do not see a problem with these shaders. However I do not understand shaders as well as I could. When I render the scene with this test texture: 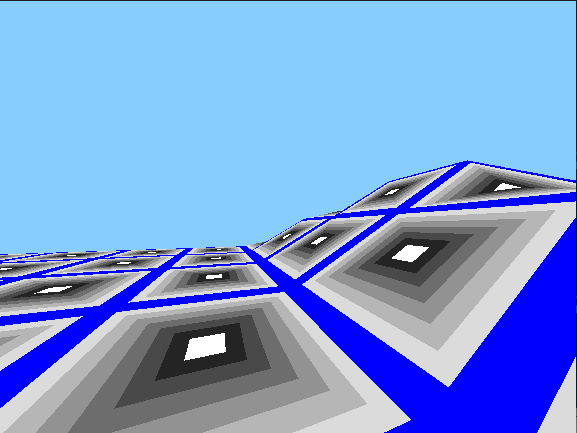 The blue lines lie on the edge of the tiles, and the white dot is in the center.

EDIT: upon testing further I worked out that the center vertex's uv is being set correctly, but all the other vertices are being set to whatever comes last in the else if ladder in the vertex shader.

I haven't been able to get through this issue. I was having similar texturing problems when I was using triangle strips to make the mesh before I realised that I could be more efficient using fans compared to the way I was doing it. I'm guessing that it is some weird quirk with how the shaders handle fans that I don't understand, or I have miswritten some code somewhere, in which case I will leave the question up as a testament to the importance of re-reading your code :-P. And There is probably a way better way to do the texturing that I am trying to do. Any insight into this issue is appreciated.

4
Any way to combine instantiated sprite renderers into one texture so I can apply into a plane at runtime?