how to center 3d camera vertically and horizontally

How to center the player/camera in the middle of the window/screen , to mimic a 2.5d camera, so it looks like this game: 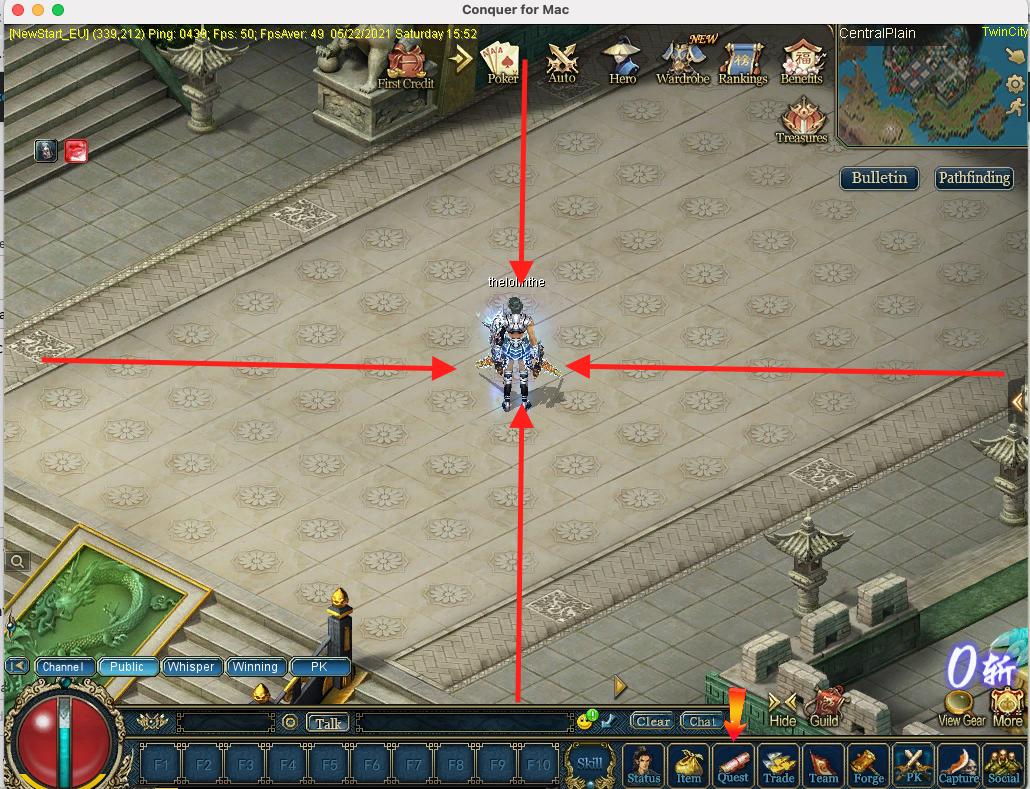 where I can move vertically and horizontally , and the camera still be centered on the player?

Edit: I want to center it 18 pixels in the 4 directions

What first comes to mind is to use a RemoteTransform. You can set its remote path is the player avatar, and to only update the position (not the rotation, not the scale). Then make the Camera a child of the RemoteTransform and give it is rotation and offset position.

I suggest to use the split view (click View on the top of the editor and select Two Viewports) and then use one to preview the camera and the other to move it.

Sadly RemoteTrasnform does not gives you the granularity to say that you want to follow the x and z but not the y. However we can mimic it:

Set the Remote Path to the player avatar. And, of course, you make the Camera a child of that node, and rotate and offset it appropriately.

Advice if you want the isometric view: The rotation you want 45 degrees (or 135, 225, 315) on y, and -35.264 on x. Set projection to Orthogonal. You may have to adjust the Size of the camera which controls how much you see in the Orthogonal projection.

This took some figuring out. I'll go over the script part by part explaining what is going on.

It is Spatial because 3D.

These are the variables we will export:

The variable remote_path is the NodePath to what the camera should follow. The variable y is the value for y we use in the transform (because we only take x and z). And the variable margin is how far off center on the screen we allow what we are following to go before we begin moving.

I have gone back and forth between whether or not we should use _process or _physics_process. On one hand the player avatar will only update on _physics_process. On the other this is about something visual (the Camera). At the end I ended up opting for _process because what this node follows might not necessarily be a physics body, and even if it is, it could be using _process for interpolation.

Since this is a tool script, _process begins like this:

Similarly we don't want it to run when it isn't in the scene tree:

Now let us get a reference to the viewport:

Just in case, let us check it is valid:

Now we use it to get the current camera:

We also need the the target that the camera should follow:

And we are going to need the coordinates of the center of the screen:

Alright, we get the position we want to follow:

We only want x and z, of course:

We figure out where on the screen that is:

We figure out the difference from the center of the screen:

And we clamp it to the margin:

If clamping did nothing, then we don't need to move:

This is the position in 2D that we want to put on the center. Notice that when off_center and off_center_clamped are equal, then target_2d is viewport_center. Meaning we want at the center, what is at the center.

However, off_center and off_center_clamped are different. So target_2d will be moved offset from the center according to that difference.

And now another tricky bit:

That's right, we are ray casting. We need to convert that position back to something in 3D.

Let us see. We want to track a position on an horizontal plane defined by y. So we need to intersect the ray with that plane.

So we have some equation that looks like this:

Let us put some vector there:

And we only care about the y, so:

Alright, we can now figure out that point. Just plug that equation again:

Which, by the way, is the same as:

Except we already did all the work anyway.

Usage is as expected. Make this node the parent of the Camera, set its properties. Position the camera.

Not the answer you're looking for? Browse other questions tagged 3d camera movement godot .

4
How do I position a 2D camera in OpenGL?
0
Adding Functionality to a basic Java 2D Camera
0
Player's camera, how to obtain smooth movement
0
How do I rotate a cube around an axis, relative to the camera view?
0
A 2D Camera Follow Script That Does Not Rotate?
1
Camera controll in Libgdx
0
Move Camera After Player Moves Certain Distance
0
Unity - Issue with Camera follow script