Structuring a game in Java

I am currently programming my first game in Java and I'm having trouble structuring it. My biggest concern is regarding the game loop. Currently I have implemented a class with only a main function which first initializes all of the variables and then goes into a game loop. Here is the structure of the code:

The problem is that the "do something" parts are quite lengthy and my code looks quite messy. I would like to turn them into methods, however I am not really sure how to do it.

While Philipp is right, another solution is to divide your Classes into packages, and divide the packages into other packages, as shown here for my game: 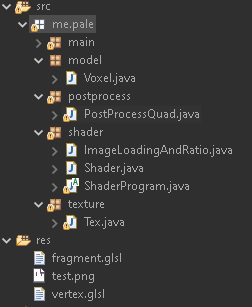 Then, you can create classes that do what you want to do, and in the main loop, type DoSomthing ds = new DoSomething(); and then in the DoSomething class, make a method that will actually do something, and call that method using the instantiated Class, like ds.doTheThings();

A common way to break down a long update loop is by creating a separate method for each individual feature of the game. For example:

If any method gets too long, consider to break it down into more methods based on the sub-problem they solve. This is called the "Single Responsibility Principle" in software architecture. Every modularization unit (like a method) should be responsible for one single thing. When you can not explain what its responsibility is in one sentence, or if that sentence contains the word "and", then you might want to consider to break it into two.

For example, when the responsibility updatePlayer() would be described as "reads the input state from the controls and applies it to the player", then you might want to consider to break it down like this:

And if the responsibilities of updatePlayer(Input input) now would be described as "makes the player walk and jump and shoot based on the current input state", then it could be broken down further like this:

1
Rendering Loop Problem (Java)
1
Structuring various game states and unique levels
13
EXTREMELY Confused Over "Constant Game Speed Maximum FPS" Game Loop
2
Why do my update and draw loops throw a concurrent access exception?
8
How should entities in a game reference each other?
2
how to make weapon charge up behavior using composition
0
Game engine tool generating game entities
3
Handling input in a custom ECS engine
0
How to slow down my Variable Timestep Loop in Java
4
How to create a solid cross-scene game manager in the editor of unity?