I am working on a 2D game in Java. My goal is to place a ball as close as possible to the center without overlapping the balls that are already there. How can this be done?

If you take each circle that's already been placed, and expand it by the radius of the one you want to place. Together, these circles form an "exclusion zone" - places where the center of your new circle cannot go without overlapping one of the circles already there. I've visualized the exclusion zone in pink created by the grey circles below. The big black dot is the center of the map we want to try to place our new circle close to. 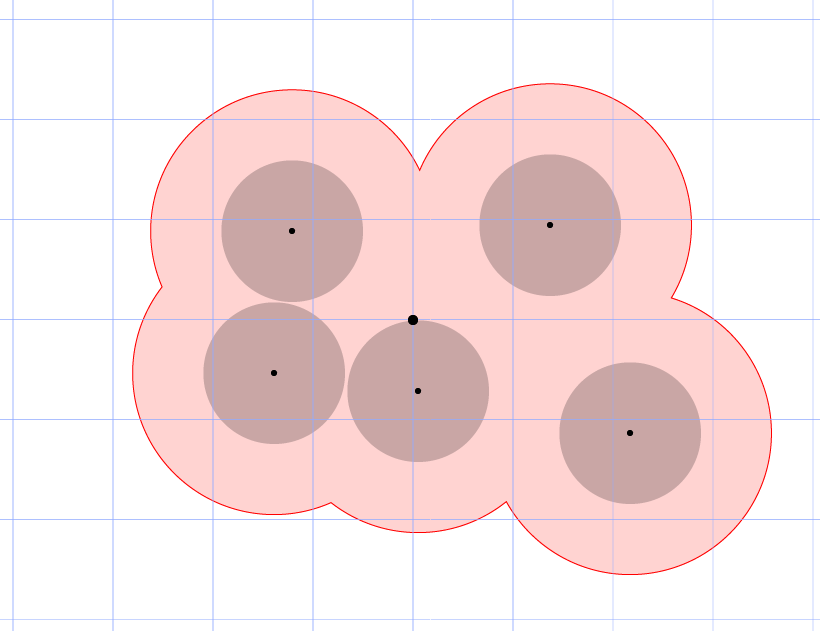 If the target point we want to approach is inside this pink exclusion zone, then the closest our new circle's center can get is somewhere along the perimeter of the blob these exclusion circles form together. I've highlighted that perimeter in red. We'll check each arc on that perimeter to find our closest point.

To speed up out checks of what is or isn't in the exclusion zone, we can divide our map into a grid of buckets. Above, I've chosen the bucket size to be \$\sqrt 2 \cdot r_\text{min}\$ where \$r_\text{min}\$ is the smallest radius of any grey circle. This means that there can be at most one grey circle center in any bucket, and we only ever need to scan a fixed set of buckets around our test point to find all the exclusion circles that could exclude it - no matter how many circles there are in total.

If all your circles have the same radius, then that's a 5x5 box centered on the point to test. If you have 25 or fewer circles, then just brute forcing through the full list would be just as good.

Alright, with that out of the way, let's get into the meat of the algorithm: 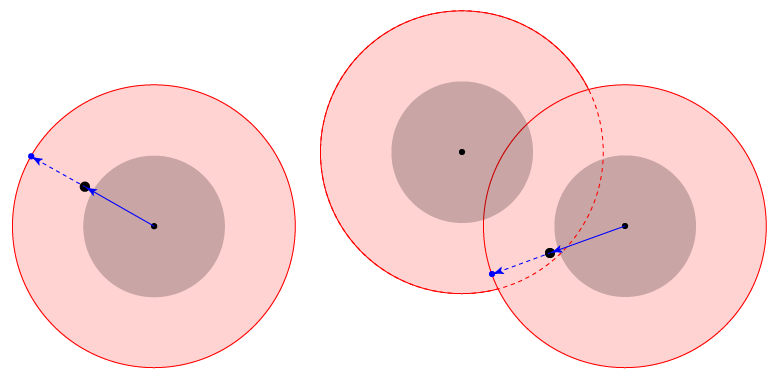 Note that unlike a randomized approach, this route is guaranteed to find the closest point there is, and that it will do so in a bounded number of steps, linear in the number of circles we need to avoid (we do a bounded amount of work per circle added to the closed set, and we add each circle to the closed set only once).

Also, in the pathological case where there is no available place to put a new circle, this approach will determine that in its normal runtime instead of running forever. 😉

While making games I face similar problems quite often. What I found is that often best (quickest,easiest) way is.. not to look for that perfect answer, instead use computer to work it out for me.

This dead simple solution will work:

So there is infinite number of points. Lets find that one.

a) write function which checks if given point is valid. It should check distance to each balls center and if there is enough space for your ball, return true.

b) write a while loop where different points are checked until valid is found. In this loop first supply the center point, then Random point close to it, then another.. until fitting point is found.

That's it. Lazy dumb solution but it will work, and yes it might take few hundred cycles to find it, but in user time it will be just a moment. Also add some protection from forever-loop.

Not the answer you're looking for? Browse other questions tagged java 2d algorithm geometry .

4
New Vector Calculation for Elastic Collision of Circle and Fixed Rectangle
15
Is there an algorithm for a pool game?
5
Ball collisions 'sticking' together
4
Bitmap Font Displays in Center Always Without Coding it Manually (Fix Coordinate Problem onText)
2
How do I implement Breakout's "multiball" powerup?
3
How do I efficiently collide and match groups of coloured circles?
0
Predicting circle-circle bounce vector when aiming one at another
1
Bubble shooter clone, structure for storing/adding of bubbles
6
Rotating sprite around another sprite
3
How to "place" object in a 3d world without overlapping them ?