How can I modify how my scene is drawn to make it look like it's taking place at different times of day?

My game has a day-time association with the scene, that the morning light will be different from the afternoon and the night. But I don't know how to make this difference.

Here is an example in Pokemon game: 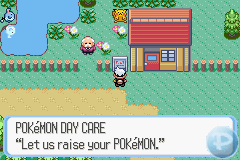 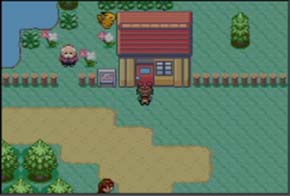 Are there any other mechanisms to do some kind of day/night cycle in a game of this style?

There are two ways to do this. The easy way and the way that will actually look like it's dark.

The easy way is exactly what you said: throw down a full-screen quad that darkens the scene. But:

The best you can do is run a bunch of tests and find the color that is least offensive. Nobody can give you a "good color", because such a thing does not exist. There is only "what you personally can tolerate for your particular scene".

The right way to do this is to have your artists redraw all the sprites for a darker scene. Obviously this is labor intensive, which is why most sprite-based games don't have day-night cycles.

Indeed, sprite games that did do some night-time scenes also had the advantage of using paletted sprites. In those cases, they simply created a special "night" palette for the sprites. This gave them the opportunity to tweak the colors for the best visual effect.

You could try something similar to this, but it would require you to use paletted sprites yourself.

Trial and error is a great thing. You've got the idea of it - an overlay of some sort would be the easiest. The suggestion to use orange for dusk, and black for night, is also a good one. But nobody here can tell you what colors to use to make your game look good - that's entirely up to you and your sense of design.

A much more complicated way to change the time of day is to generate an entirely new set of sprites for each period of the day. Most of these sprites would be simply shaded differently, as if you were using the above overlay, but this would allow other effects like streetlights and such.

From my very limited experience doing this type of thing in a couple games that I've done, to make it "darker", i.e. night time, I would do just like you said and add a black layer over the game, and make it closer to transparent than opaque.

For evening time, I would do the same thing, but with an orange color to give it a "dusk-y" feel.

If you want to make it get darker (or orange-er) gradually, then just gradually raise the opacity on the color over time.

That's what I would do anyway. I'm sure there may be a better way out there.

Not the answer you're looking for? Browse other questions tagged graphics graphic-effects effects graphics-design or ask your own question.

6
How to generate seamless hexagonal textures
11
XNA Adding Craters (via GPU) with a “Burn” Effect
24
How can I make water appear darker with depth, like in Minecraft?
12
How do 2D art assets (eg. sprites) work?
4
glsl shader to allow color change of skydome ogre3d
0
Draw many flashlights' focused lights' “circles” on a voxel engine map (and other objects)
2
How can I make my game look pixelated?
2
How would I create colouring such as in Splatoon?
3
How can I create the graphical concept for a game?