With GGPO rollback netcode, how many times might I need to update my game engine in one frame?

I'm working on a game that's going to use GGPO for rollback netcode. I understand the need for a deterministic engine whose state can be saved, restored, advanced from user inputs, etc. I understand that I may need to do this several times in a frame, and that therefore, from a performance point of view, updating the game engine needs to be fast enough to be called more than once in a frame.

My question is.... how many updates in a frame do I realistically need to budget for? If I can identify a realistic worst case, I'll simply run my game engine that many times a frame while I'm developing it.

networking performance peer-to-peer
Share
Improve this question
asked May 5 at 12:05

I haven't used GGPO but reading through the documentation, it looks like you would just use the amount of updates that your engine needs. I think that's 1 per frame. Looking at the diagram: 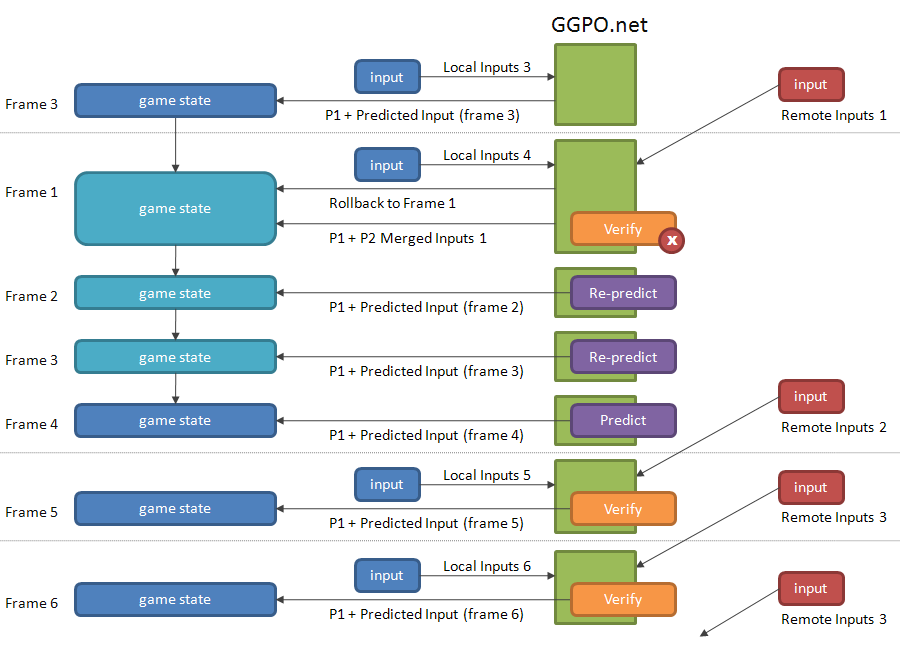 It looks like the prediction serves as the remote update for the most part. You would track player input locally, update with predictions, validate with real remote data, rollback when appropriate.

GGPO checks the quality of its prediction for previous frames every time it receives a remote input. As mentioned earlier, GGPO doesn't receive the inputs for player 2's first frame until player 1's fourth. At frame 4, GGPO notices that the inputs received from the network do not match the predicted inputs sent earlier. To resynchronize the two games, GGPO needs to undo the damage caused by running the game with incorrect inputs for 3 frames. It does this by asking the game engine to go back in time to a frame before the erroneously speculated inputs were sent (i.e. to "rollback" to a previous state). Once the previous state has been restored, GGPO asks the engine to move forward one frame at a time with the corrected input stream. These frames are shown in light blue. Your game engine should advance through these frames as quickly as possible with no visible effect to the user. For example, your video renderer should not draw these frames to the screen. Your audio renderer should ideally continue to generate audio, but it should not be rendered until after the rollback, at which point samples should start playing n frames in, where n is the current frame minus the frame where the sample was generated. Once your engine reaches the frame it was on before GGPO discovered the error, GGPO drops out of rollback mode and allows the game to proceed as normal. Frames 5 and 6 in the diagram show what happens when GGPO predicts correctly. Since the game state is correct, there's no reason to rollback.

I would see no reason to update more than once per frame, every frame.

Not the answer you're looking for? Browse other questions tagged networking performance peer-to-peer or ask your own question.

35
Movement prediction for non-shooters
3
How to deal with inconsistent network delay caused by packets arriving at different times in the frame?
3
Optimised server structuration
0
How to deal with race conditions on a game server between network and physics update loops?