Why are my Player Input Unity Events started twice?

I'm using the (new) "Input System" package and the "Player Input" component on my player prefab like this: 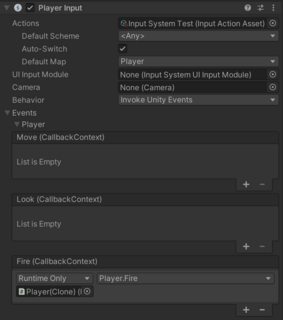 The odd thing is, this method is invoked twice with context.started == true. What am I missing here? Why is the method invoked twice?

A minimal working example to reproduce the behaviour can be found on GitHub.

The player joins automatically through the "Player Input Manager": 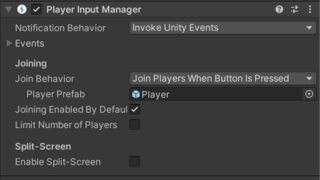 I tried to reproduce this issue by creating a brand-new project with the Input System and using your sample code. Nothing changed, but I can definitely suggest a workaround for this.

While using the Player Input Manager led me to the same results as yours, just spawning the Player prefab via custom code (or adding it to the scene beforehand) worked just fine. The Fire() callback was being called once only when the mouse button was pressed, as expected. Pew pew!

According to the scripting API, the Player Input Manager «manages joining and leaving of players», and that's it. I think you can smoothly get rid of this component and write your own Player Manager, which deals with spawning your player prefab and toggling user input during cutscenes and stuff.

The behaviour you are experiencing is likely to be a bug. The new Input System is a handy alternative to the limited, built-in input manager, but it's still under development. You may report it to the Unity team as well.

5
Input events slow on unity Update function
5
Consume input events in Unity 4.6
1
Unity provides wrong Input value if game is started with bumpers pressed down
0
Click event doesn't trigger when clicking
0
Why are my click events being fired many times for every click?
0
Unity2D: Creating a Cross-Platform Multi-Player Game in Unity Error!
1
How to completely stop the camera from clipping into the ground
0
Unity - Smooth player input direction when changing camera